It seems inevitable that I cannot hold on to nice things. I got a great wicking hoody for this trip, it was warm and everytime I put it on I thought “this is a good item of clothing”. It’s gone. In contrast, I have several pieces of clothing that I’d like to lose but which stubbornly remain with me for decades. I really have no idea what happened to it, I would have had it on this morning, maybe I left it on the back of the bike, perhaps it fell off a cliff.

Having slept pretty well I slipped out of my tent went to the campers kitchen to help myself to some free instant coffee and milk and use what little remained of my cereal. There was a “free food” box, it had some good stuff in it, like half a jar of instant coffee, and a Scandinavian version of the same thing in a pouch. I took the Scandinavian instant coffee with me. I’ve made a fuss of using my Italian coffee maker for the past several bicycle trips, but instant coffee is really where it’s at. It’s instant and it’s powerful.

I pulled out of the campsite at Doolin and was immediately climbing cliffs. It was spitting in rain and clouded over, the visibility was pretty poor, I followed the cycle route as it traced the cliffs, I saw a sign for a “visitor’s centre” and then there were lots of people. There was a coach park, lots of car parking, and a network of paths, stairs and ramps leading up to the cliff. 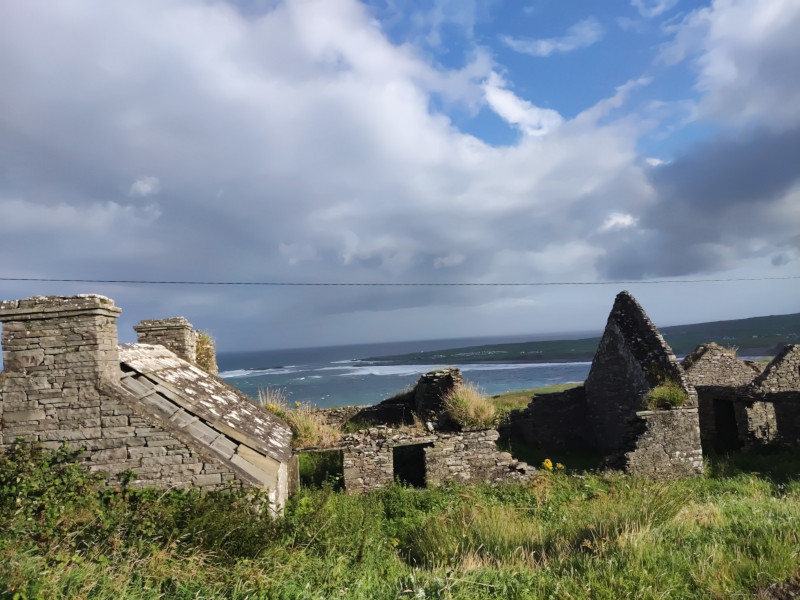 I was tempted to pass it by, but not seeing any need to pay, or any obvious signs that would prevent me from riding my bike up the ramps I decided to investigate. I tentatively rode to the edge and saw the Moher Cliffs.

Apparently these cliffs are one of Ireland’s top tourist attractions. They are quite spectacular, but they just big cliffs. Somewhat more impressive is the visitors centre. It took 17 years to build and cost €35 million euro. It’s built into the hill. 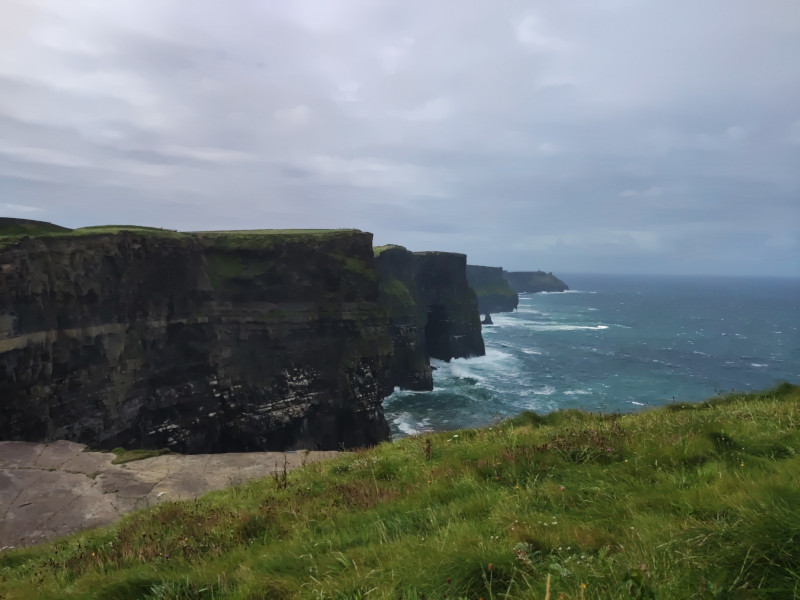 From my viewpoint it was possible to climb higher via. stairs, or there was a tiny access road for a golf buggy that was ferrying people up and down. I took the extremely steep golf-buggy road “Impressive!” an American woman exclaimed at me.

After this I descended, I was heading to the Ferry to Talbert, which would give me a short-cut to Kerry, enabling me to avoid about 100k or so of cycling. It was about 40k away and it was a tough ride. 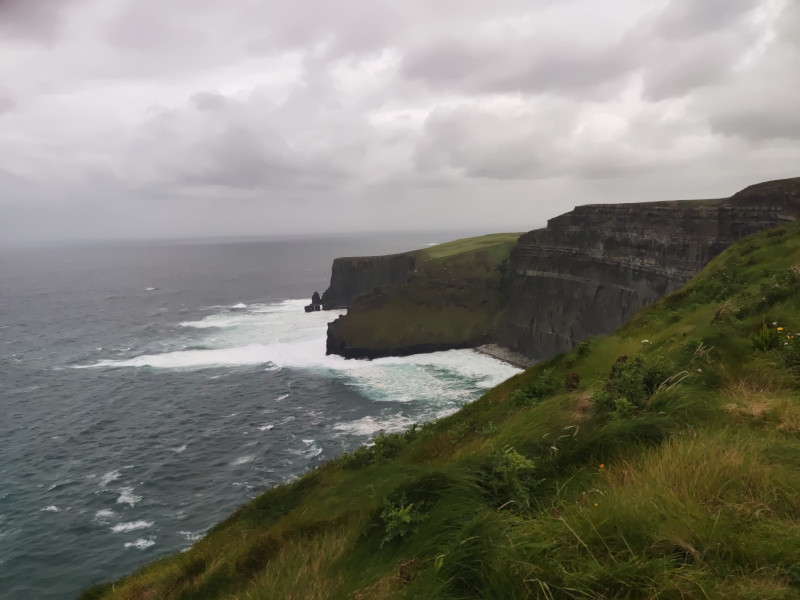 The wind was blowing hard directly towards me and the poor quality road undulated tormentingly.

The ferry ran from Killimer to Talbert every hour. I was lucky to turn up when the ferry was boarding cars and I rode straight on. It cost €6 and took about 20 minutes.

Whilst on the Ferry I tried to decide where to stay tonight. There were not many options. My target was Tralee, which was about 50k using the most direct route. I had seen a hostel there with dormitory beds the previous night, but I think I was looking at September and not August. There were no beds for this night, there was a campsite there however. At this point I was already pretty exhausted though. I had only done 60 or so kilometers but they were hard kilometers. I tried Air B&B. There was a “camping field” for €15 near Listowel. This would be about 25-30k instead of 50. It was clearly somebodies house and they let people camp in their garden, what didn’t impress me was that everything else was €5. Shower? €5. Charge the laptop? €5. On top of that Air B&B charges a service fee, bringing the total to around €18. Nonetheless I “requested” it feeling better to have a destination than just to keep cycling until I found a wild camping place.

After an hour the host had still not replied however, and I could still cancel my request. I had another look at Tralee. It was 3PM, I could make it to Tralee easily. I phoned the campsite and it was confirmed they could accomodate me, and best of all it cost €15 and includes showers. I cancelled the Air B&B. 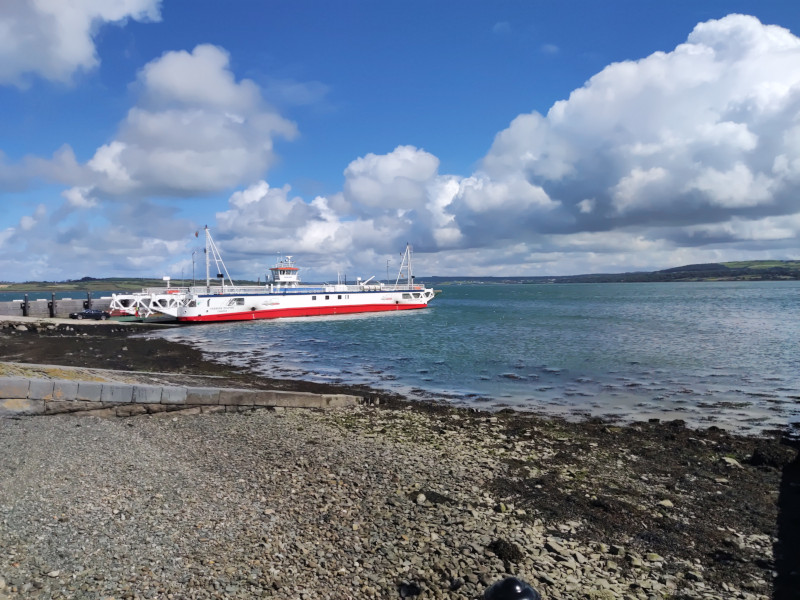 I headed to Listowel which is about half-way between Tarbert and Tralee. Listowel was another town with a one-way traffic system which was insanely busy. Constant stream of traffic pulsing around in one direction.

There was another cycling “Greenway” (the great southern) which I hoped would take me to Tralee, but it seems it’s under construction and this section of the route was not finished. Not having much patience for the meandering EV1 I took the main road.

The main road was very busy however and not ideal. I persevered with it for 2 or so hours. It was not fun, constantly checking my mirror to check if a huge lorry was bearing down on me at 100kmph. In general all the traffic is very respectful of bicycles, but it’s still stressful. You can’t relax.

I had thought Tralee would be a small village, but it was actually a pretty large town. I found the campsite “you made it then!” said the guy I had spoken to on the phone “2 hours to spare” I replied.

The campsite is pretty huge, there are hundreds of kids. There is a theoretical curfew at 11PM but I think I will pass out regardless.

Accommodation options look pretty poor, even though there are lots of hostels around here, none of them have any beds tonight, tomorrow, the day after tomorrow or the day after that. There are however quite a number of campsites.