As I finished writing my blog post last night I was absolutely exhausted. I retired to my tent, there was an ambient sound of children playing and they occasional tschhhh! of a drinks can being opened, but I was soon asleep. I awoke however at around 2am feeling quite unwell, I had a headache and felt a little nauseous. I think it was probably a combination of dehydration and something I ate. I got back to sleep and in the morning felt better, although I was lethargic, I didn’t want to get out of the tent, but as usual duty called.

Later the previous evening another cyclist pitched up near my tent, I did nothing but nod but as I emerged from my tent this morning I could see him packing up “where you headin’?” I asked. “North, how many kilometers do you do every day?” at last! somebody who understands. “about 100 a day” I said (which isn’t quite true, that’s my target per day, I’m currently averaging around 110 a day I think). “I do more” he said, “yesterday I did 140” “how’s it going?” “i have pain in my wrist and it’s a but lonely on my own, but I have music and I am flying”. Which is a summary I can relate to, I wish I had music. He was from Poland and was wearing a racing jersey. He struck me as somebody that took kilometers seriously.

I didn’t really feel prepared for today. I also spoke to a French couple as I was leaving, they said that I was heading towards a 400m pass with a nice view 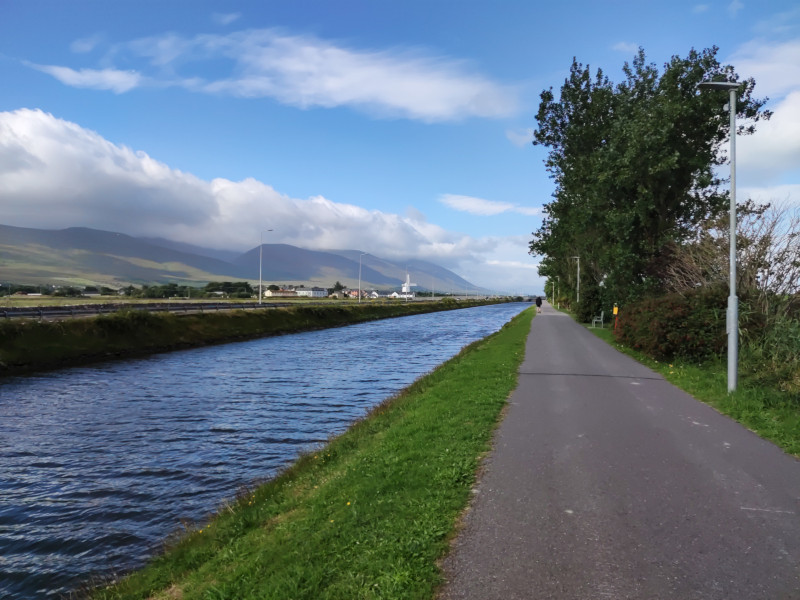 Today I would be riding most of the Loop Peninsula, the first of four peninsula’s forming the south-west of Ireland. I left the campsite and immediately joined the EV1 and cycled west, into the wind, for about 30k before getting to the Connor Pass.

There were several signs warning large vehicles not to proceed, the ultimate one said “TURN BACK NOW”. I was expecting a steep climb, but it was a mild 7% which took about an hour to climb, at the top there was a good view, which would have been a lot better if it were not so cloudy. It is the highest pass on Wild Atlantic route, which is for cars, probably it’s the highest point on the EV1 in Ireland too. 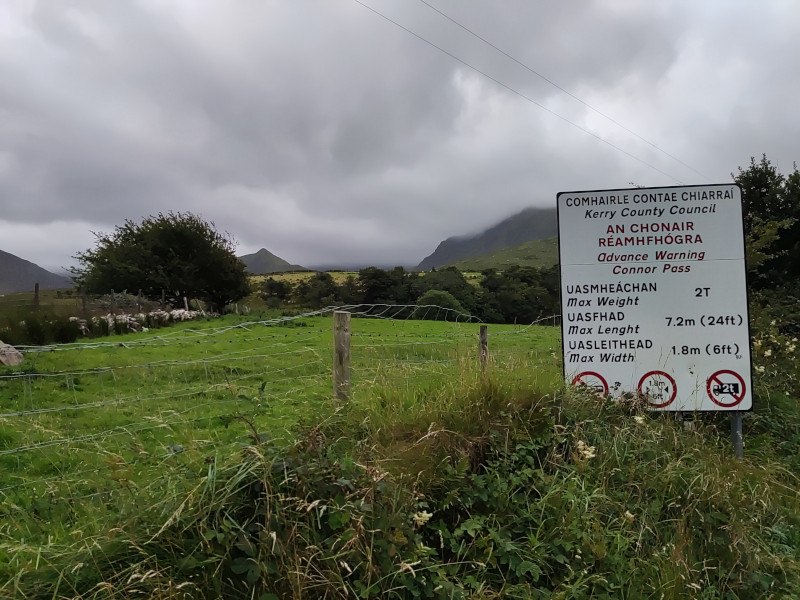 I was getting cold and I put my rain jacket on, which breaks the wind but also prevents any air circulation and prevents moistore from leaving, so I become soaking wet from the inside. 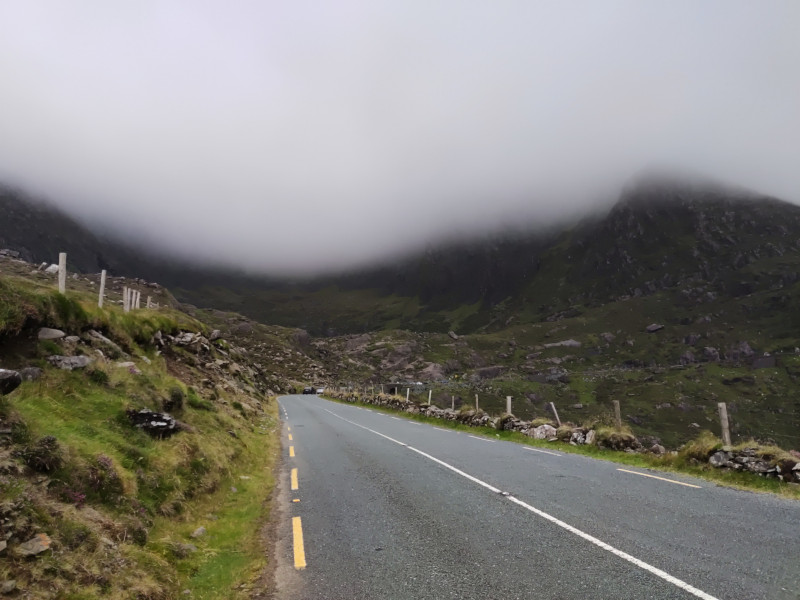 In the morning I had decided that today would be a short day, maybe I’d just cruise up to the next campsite. By now I had around 45k behind me. As I was descending into Dingle I passed a B&B advertising vacant rooms for €30 a night, an extremely cheap price (the hostel in Dingle would have been around €30 for a dorm and €100 for a private). But I was descending fast and I didn’t make my decision in time that it would have been mentally possible for me to climb back up the hill to find it again. 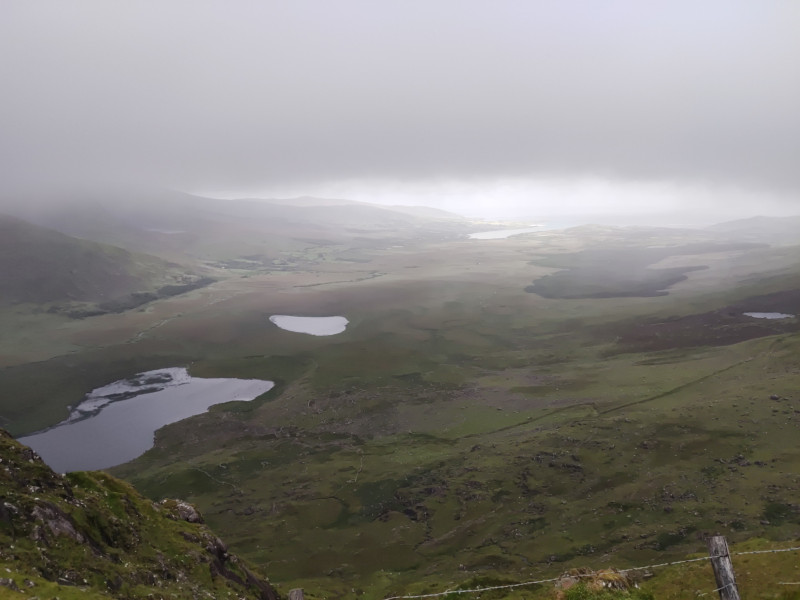 Dingle was yet another one way traffic system, at this point I’m getting used to it. Just lodge in between two cars and take a tour of the town. I was looking for somewhere where I could buy headphones. My “buds” are now practically useless and music is a huge mental booster when cycling, and I’ve been missing it all this time. I found no shop for headphones, but I did find an outdoor shop and decided to replace my lost wicking hoody, eventually deciding on a Regatta Soft Shell jacket for €65 which looked warm enough and was water and wind resistant.

I stopped for a coffee and a flapjack “we past you on the pass!” said an American, his wife said “you were going very fast!” (presumably they passed me as I was going down). There were two young girls in the café (maybe 14 or 15) that seemed to be touring on their own around Ireland.

Finding no accommodation in Dingle and being reluctant to back-track to the B&B I saw on the way down) I located a campsite around 20k ahead on Inch Beach, I phoned ahead and the guy happily confirmed that there would be place to me, and that there is a food truck.

The last 20k were fairly easy and I arrived at the campsite. It was very close to the beach, which seems to be very popular with surfers of all kinds. The beach itself is over 2 kilometers long.

I setup my tent and dozed off for about 45 minutes before going out to explore, I approached the beach and decided to go back to the tent and getting my bathing shorts. I expected the water to by icy cold, but it was very reasonable and it was not such a shock to the system to dive in. I rolled about in the waves like a sea otter for about 30 minutes. 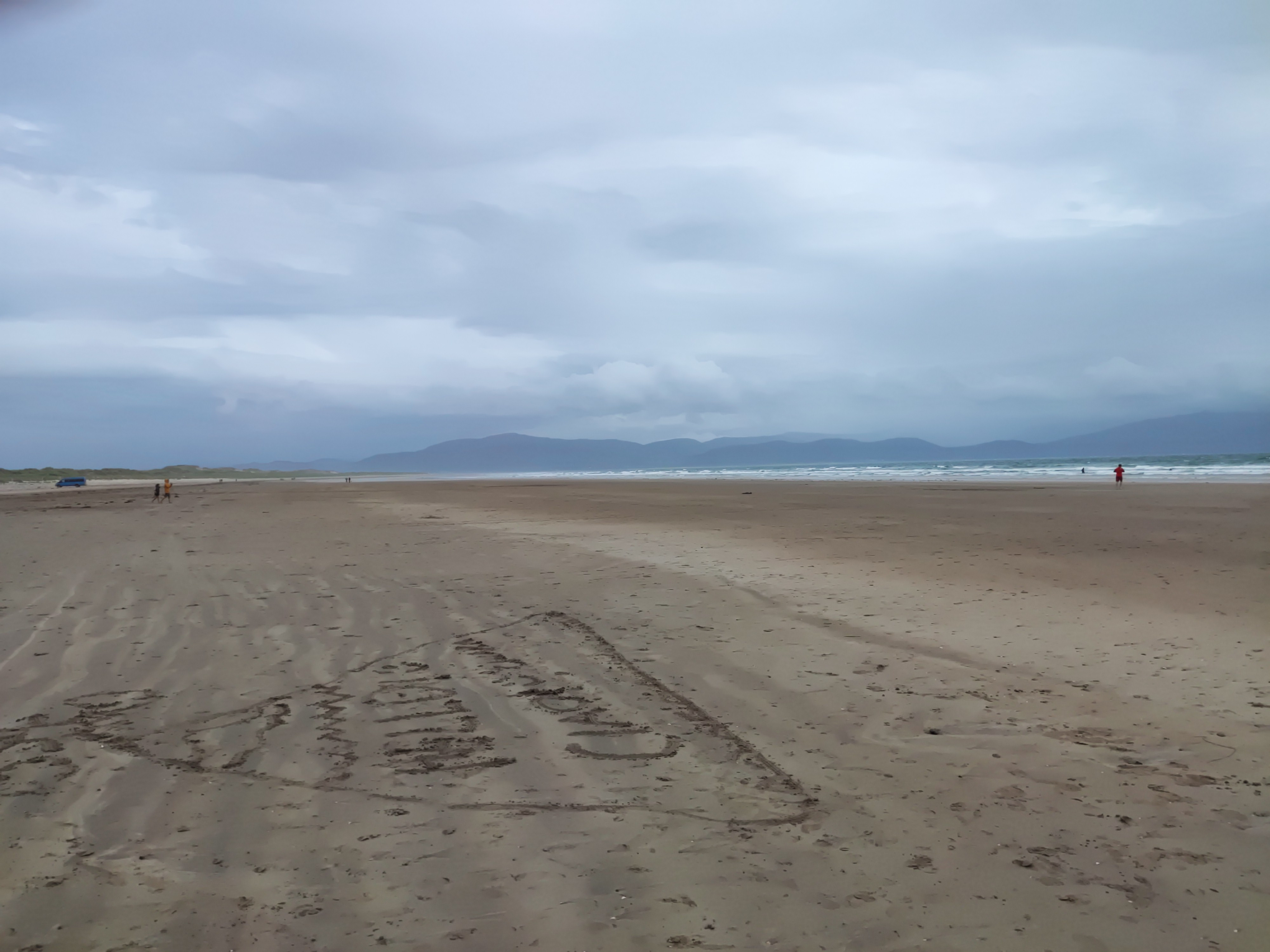 I’ve just finished eating some chips and burger which I got from the food truck. The chips were very good, the burger wasn’t bad, but I’m still hungry. I might visit the shop and get some junk to plug the hole.