Last night was another tough night. There were campers who at first were annoying and then as the hours wore past 12, 1 and finally 2 became unbearable and almost caused me to lose my mind. On top of this I had the same headache and pain as the previous night, which I now suspect is something to do with the angle at which my neck is resting (I have no pillow). Finally, I solved both the problem of the campers and the neck. Firstly I had my ear plugs in but they made no difference, it was only later I realised one of the plugs was not in good condition and using a new one completely blocked all sound, secondly I stuffed a bunch of my clothes in my air-matresses “pump bag” and used that as a cushion.

When I woke in the morning I had the usual camping lethargy, and arose relatively late. On the positive side, it was sunny and the clothes I left on my bicycle to dry were dry and not soaking wet.

I skipped breakfast and coffee and hit the road. It was 20k to the next “town” (Castlemaine) and I reasoned I could get a cooked, vegetarian, breakfast. The ride inland along the bottom of the peninsular was not very taxing, and when I rolled up to the town I found it was very small, there was a corner shop that made sandwiches and I got a large ego-mayonnaise roll and a coffee.

The weather today was close to perfect, it was sunny, the visibility was good, but there was also some cloud cover.

In the next small town I stopped at a Spar and loaded up on emergency junk food: bourbon biscuits, McVities Jamaican Ginger Cake and a bar of chocolate. As I was packing the junk into my panier an old man pulled up in his van “quite a load” “yeah!” I said, there followed an awkward silence “it’s heavy” I suggested “how many kilometers per day?” “I try and average 100” I said “where you from?” “Weymouth, England” “Waddayathankofboronson” “what?” “Boris Johnson, what do you think of him?” “bit of a cock” I replied. Sadly I think despite his clowning he’s still probably better than the candidates for his replacement.

Pulling out of the town I saw another cycle tourer heading into the town, and recognised him as the American (Washington) from Day 4. On Day 4 he was heading in a clockwise direction, I guess he got the train over. I didn’t stop to speak to him but carried on. 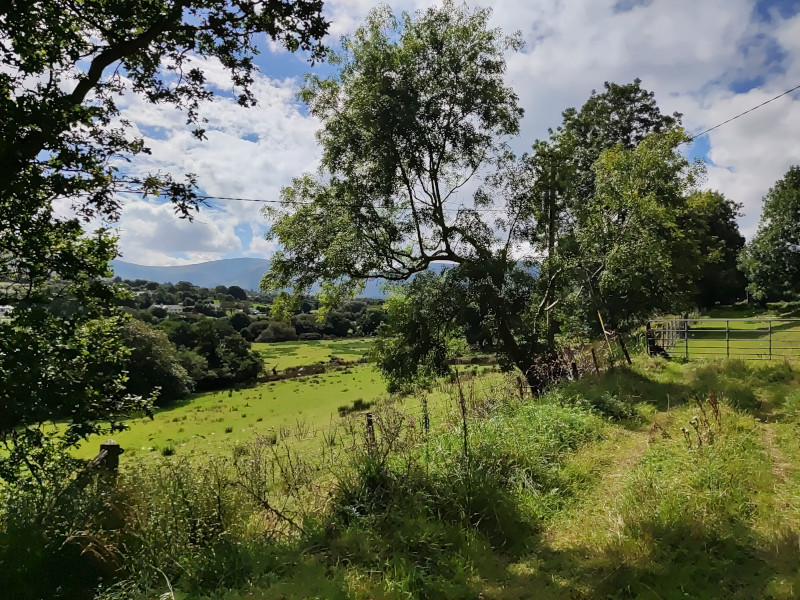 I was now on the Ring of Kerry - apparently Ireland’s most popular tourist attraction. It’s a “panoramic road that surrounds the Iveragh Peninsular. The cycle route started on the main road but soon forked off onto small, extremely quiet, country roads. Today I was in no hurry, I was willing to do another short day, and I was happy to take the longer, more scenic, cycle route.

Spectacularly lush and green would be one way to describe it. This luminous green of the fields, trees and bright coloured wild flowers, with large mountains overhead with fractal-like patterns etched into them by the rocks and overgrowth.

By and by I joined the main road which ran directly on the coastline, giving a view over to the Loop Peninsular and the beach I had camped at last night. 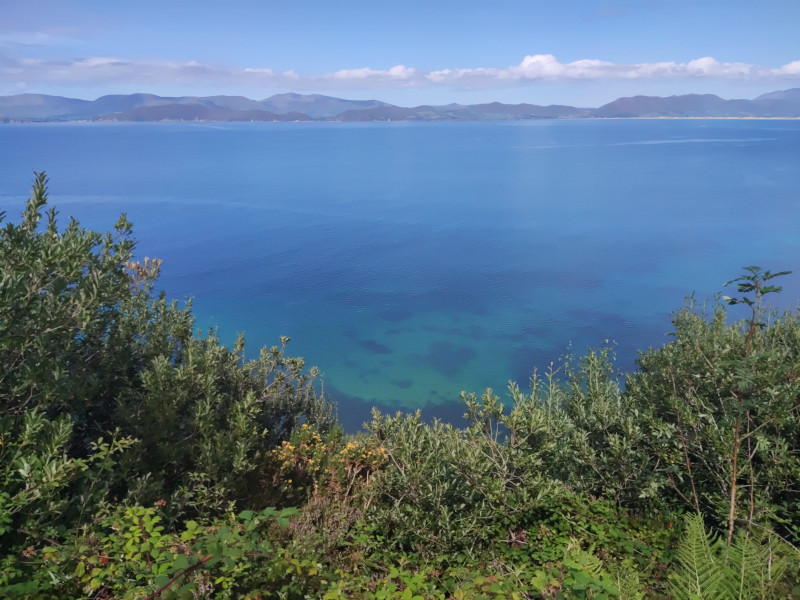 Looking towards the Loop

I got to the town Cahersiveen, I had researched a campsite that was offering a rate of €8 per night for cyclists. I looked around for any hostel cancellations, but finding none I decided to stop here after only 75k.

The Sleepy Hollow campsite was my previous best campsite, but this one is its equal. It’s very peaceful and there are segregated areas with names such as “Mary-Anne”, “Hidden Spot”, etc. It’s by the water (but there is no beach) and offers a good view of the mountains. There is a large camping kitchen facility and dining area, and a living room with a range of musical instruments. 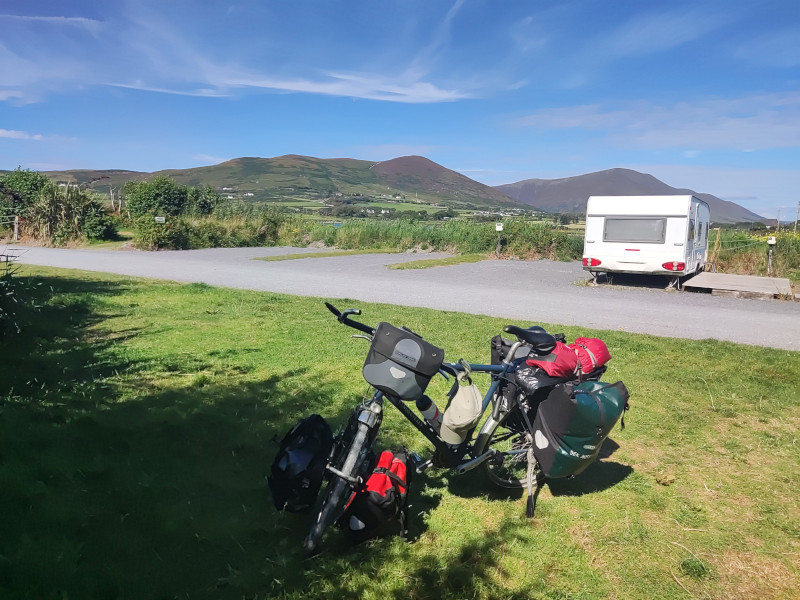