I had just done a couple of climbs and was 80k into my ride and I noticed a place called the “Climbers Inn” which, I knew, was a hostel. I also knew that it was a full hostel, I didn’t realise that it had camping however. The sign clearly said “camping”. The next campsite was about 80k, I didn’t want to do 80k but I also knew I could wild camp. But then the hostel would probably have some nice facilities and I was already there.

I guitily started to progress towards it, I had only done 80k and had intended to do around 120k today. When I got there there were 40 or more vintage motorcyclists with their 80 year old machines, most of them seemed to be older men. The sound of pistons was heavy in the air today. “The camping is out the back, but it’s at your own risk” the barmaid at the Inn informed me “how much is it?” “it’s free, but it’s at your own risk, will you be having dinner?”

I rode round the back and there were some other campers, I nodded at them, the “back” was just a smallish grass field, only the front part was mowed, and I camped quite close to the group which I later learned were from Czech Republic. Too close really, later I saw another group camped at the back of the garden and thought, “oh, I could have camped there” I made a coffee, sat in my tent, and felt slightly stupid that I was sitting in a garden, next to a group of young Czech walkers when I am in a huge and beautiful national park with lots of places to wild camp.

At least I have Wifi and can justify buying dinner in the Inn because the camping is for free.

I left Mannix ponint camping, saying thankyou to the old man that runs the place, it was a great place to stay for two nights and I proceeded west on the EV1. 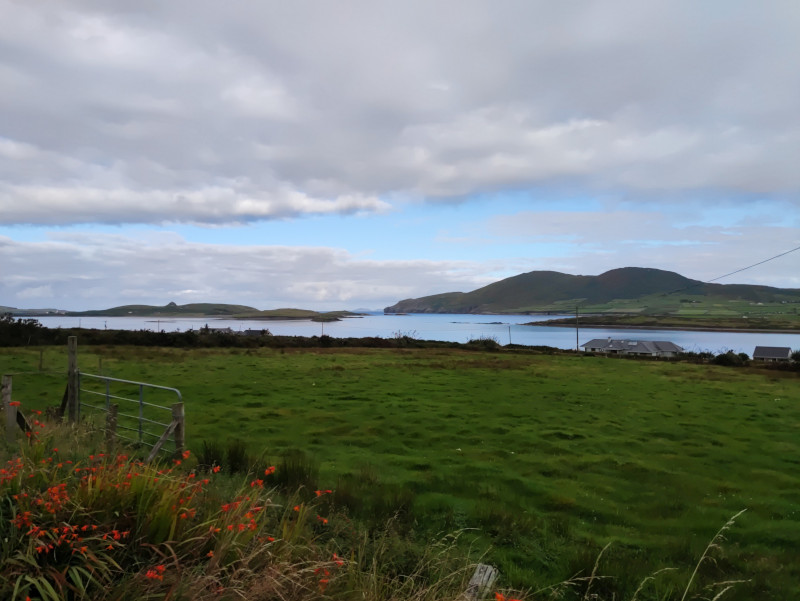 I hadn’t yet rounded the peninsular, there was a choice shortly after leaving the campsite, follow the cycle route and take a ferry to Valentia island, or skip the Island completely and save some time. I had a quick look, the ferry ran continuously, so I wouldn’t be waiting, taking this route would add 20k to my day though, I reasoned it would probably pay off.

The ferry cost €2 and I sat down and read my book for the 10 minutes it took to cross. I was doing the Skellig Ring route apparently which took me to an amazing looking bay, with cliffs and pointy islands in the background, turned blue from the distance. It was at this point that the first trans-atlantic communication cable was laid in 1850 or so, which is an amazing achievement for the time, the last cable was laid in 1894 and was in use up until 1965. 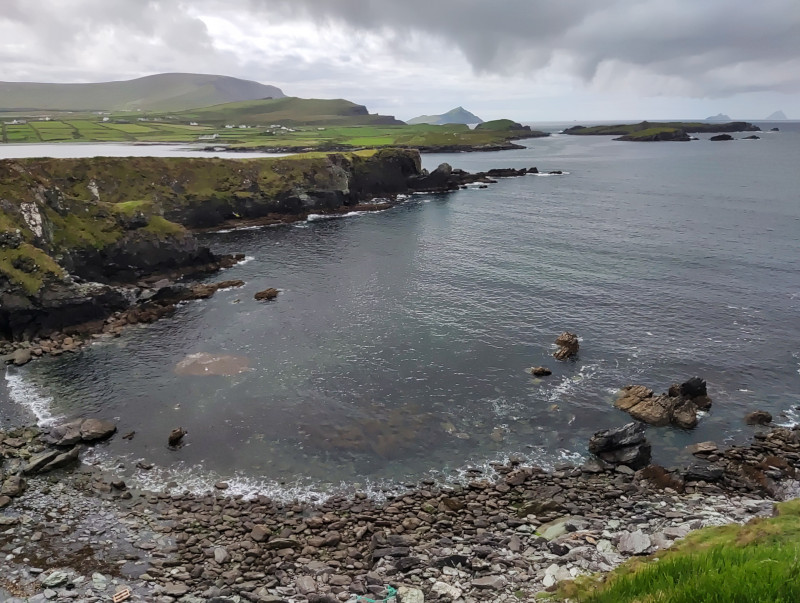 As I left the island over the bridge I approached a beach and saw another cycle tourer up ahead, when he saw me he pulled in and waited, evidently wanting to speak “Bonjour!” he said, “Comment ca va?” I replied, “Bien et toi” “pas mal” “tu vien d’ou” “angleterre” “et tu parle francais comme meme” “un petite peu” “where are you heading?” we carried on speaking in English and French. 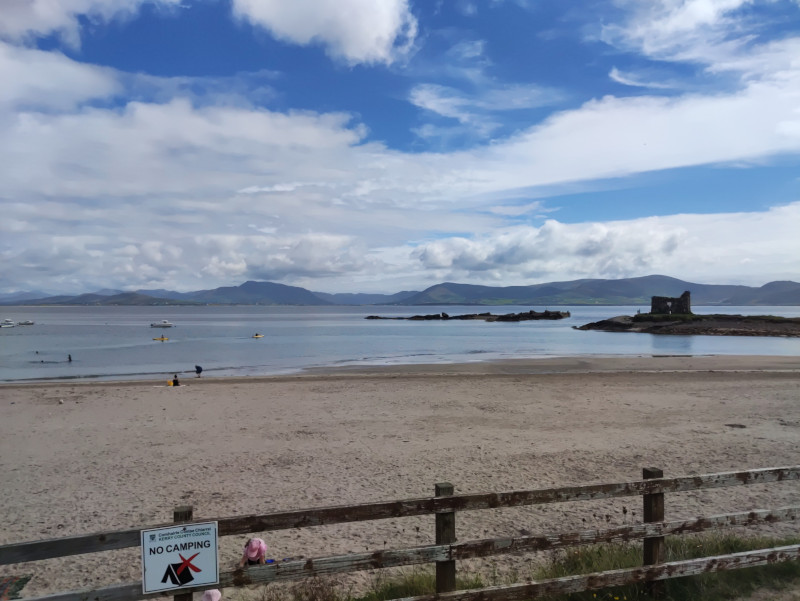 He noticed and recognised the branding on my bicycle “Rando Cycles”, “how is it that you have a French bike?”. I explained that I had done my first “tour” on a bike from England, I cycled around France, got a job in Paris, put the bike in the basement and it got stolen (not quite the truth, but close enough), requiring me to get a new one. I got it from the shop “Rando Cycles” which has since closed, but was the main bike touring shop in Paris, he also had his bike built in that shop.

“Where are you staying?” “I do only wild camping”. He had come from Paris, via. Orleans, crossing at Roscoff to Cork and cycling clockwise to Limerick to get the train to Dublin in order to get his flight back to Paris.

“Only wild camping”. He is the second French tourer I’ve met that is only doing wild camping, I wealkly suggested that there was a great campsite up ahead, but he was not interested - why would he be? He is a superior being, a wild camper. “I camped on a sports field and I was able to use the toilets, charge my phone, use the shower”. He camps anywhere and I’m sure he pities the poor fools that pay for accomodation. I’ve done one wild camping in 18 nights.

He told me that the way ahead was hilly, and I told him there was a big fuck-off 400m hill ahead of him. There was a big hill, a 350m climb, and it was the first climb that made me sweat and breathe heavily. It’s not that I struggled, but it required dedicated effort.

Before this 400m climb were the “most spectacular cliffs in Kerry”. I pulled up, expecting to be able to ride up to the edge of the cliff, but unlike the Mohren cliffs (which was public) it was private property, and you had to buy a ticket to look at them. I declined to do that, maybe I should have done it for the sake of the blog.

The route had been on the coast and at this point it went inland with mountains forming the background. I was heading into Mordor.

There was another climb, the Ballaghsheen Pass. Again I was panting and puffing like a steam engine climbing the final stages of it, although it wasn’t a long climb, maybe just one or two kilometers, peaking at around 350m.

A while before I was at the top I heard banging pistons, and I heard them for a surprisingly long time, it was a motorcycle, another one of the old ones which have been all around this area today. Groups large and small on vintage motorcycles. When I reached the summit they came into view in my mirror, I stopped at the top and they overtook me, stopping ahead. 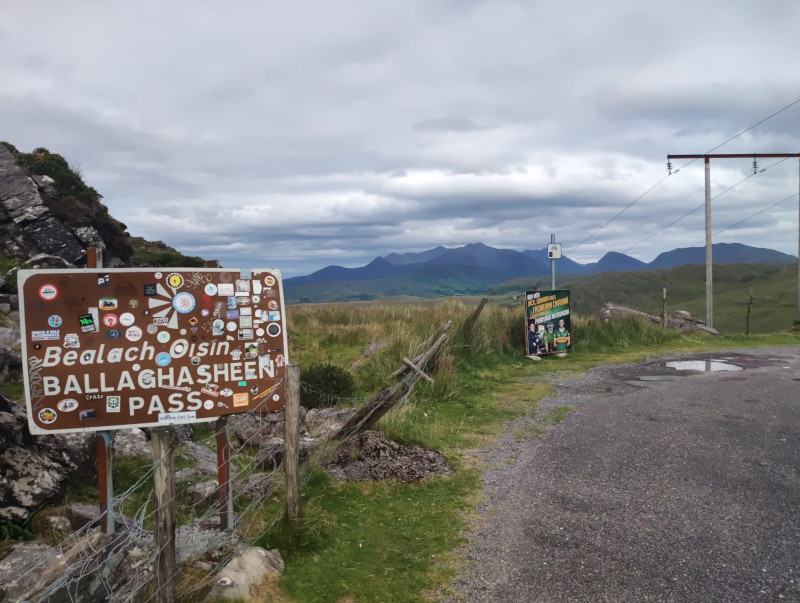 They were speaking French (I thought later that there are more French than Irish in Ireland) one of the men was looking at me with a pretend “gobsmacked” expression, clearly he wanted to say something about me climbing the pass, I nodded and pulled up to take a photo, as I turned round he was still preparing to say something, I shouted “bon voyage!”. I should have engaged in a coversation, but I just left and sped down the mountain. The road ahead was clear and visible and I flew down into the valley for maybe 5 kilometers.

I progressed, admiring the scenery, and wishing I could listen to some music but could not because my ear “buds” are deader than ever, climbing for some kilometers before arriving at the Climbers Inn as described at the beginning of the post. 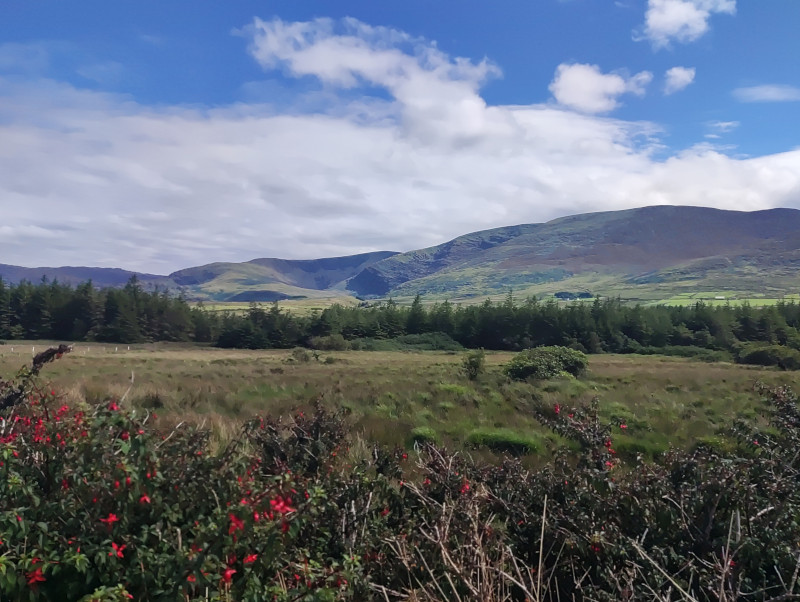 I’m now sitting in the Inn, on my second glass of beer. Next to me is a French family, and opposite a couple of Germans. I asked if they had any vegetarian options and it was a “no, but we can make you some pasta with vegetables” “well, that sounds great”. It didn’t taste bad to be fair. Before dinner I also managed to finish off my programming task from the previous days.

Tomorrow will likely be a wild camping day, the next campsite is at 50k, and the one after that is probably at 180k, the French cyclist from Day 6 told me that the south west is more “wild” and I think I’m heading into that tomorrow, if I’m not already there.