No wild camping today. I’m sitting in a campsite, the sea is about 50m away, the sun is shining, I can hear the swoosh of the waves and I’m cooking pasta, sheletered from the wind behind my tent which is wronly positioned so the door opens into the wind. It’s very quiet, just the occasional scream from the few people dipping into the waves. 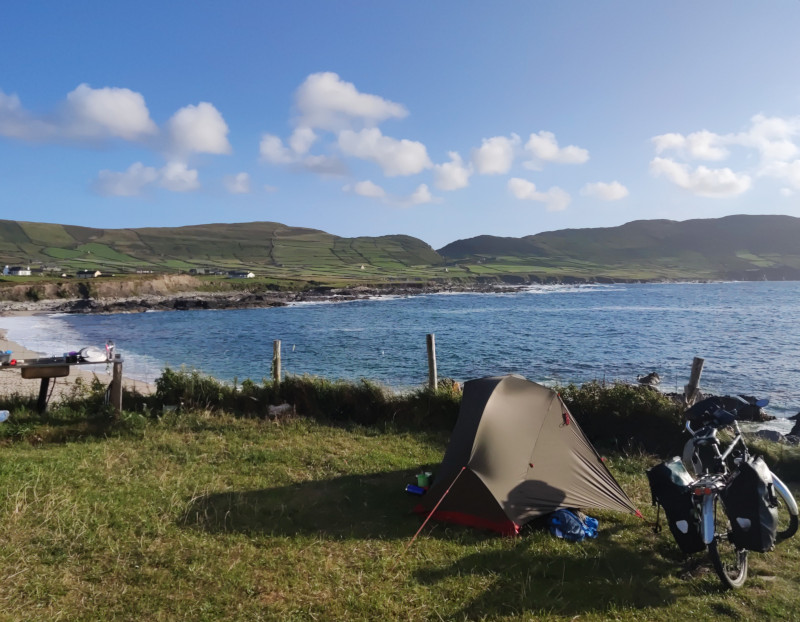 Today was a good day, good scenery, good climbing, good flat sections, and importantly I purchased some new headphones so I can finally listen to music while I’m riding, which I have enjoyed.

Last night I paid up for my dinner in the Climbers Inn (est. 1849), the pasta and 2 beers cost me just over 20 euros. Given the camping was free I didn’t mind the steep price (although not especially steep in Ireland). The campsite out back was peaceful, everybody was in their tents I settled down and read the penultimate chapter of my book, when I retired one of the other campers was snoring, but I put my ear plugs in and that helped. I also realised I had put my tent on a slope, so I found my self slipping downwards on my air matress, but all in all a good night.

I woke earlish in the morning and resolved to get an early start, I exited my tent and said hello to the girl with the Czech campers who had just returned from the rudimentary shower. I packed up and wheeled the bike round the front and had some breakfast: a chunk of Jamaican Ginger Bread and some cookies, and I hit the road. There were clouds rolling over the top of the mountains.

The EV1 was took me south-west, exiting the Glencar national park, I climbed a one ass - the Ballaghbema Gap - and as usual the scenery was spectacular to the point where it’s becoming mundane. I took many photographs today, but many of them are similar. 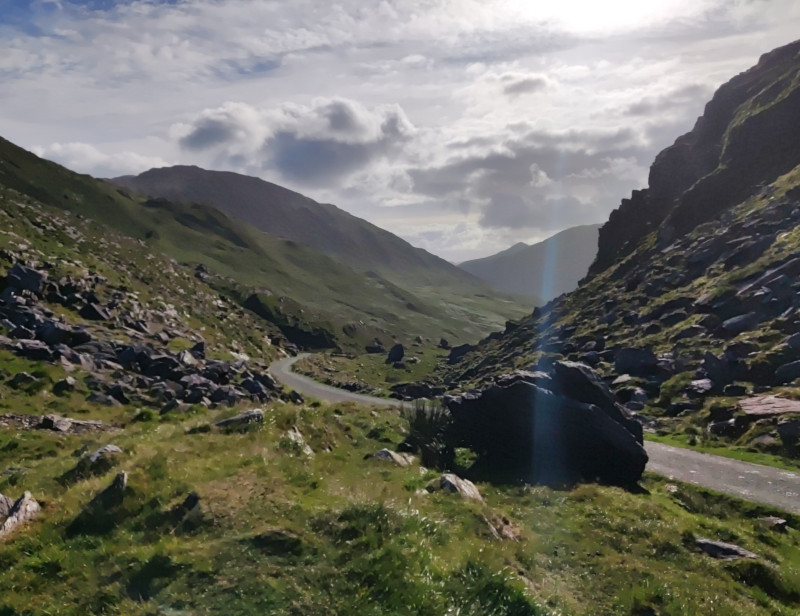 Kenmare was the next town and I hoped it would offer two things: headphones and a vegetarian cooked breakfast. I hadn’t done so many kilometers yesterday, but the 80k I did do were quite tough, in anycase I was hungry. 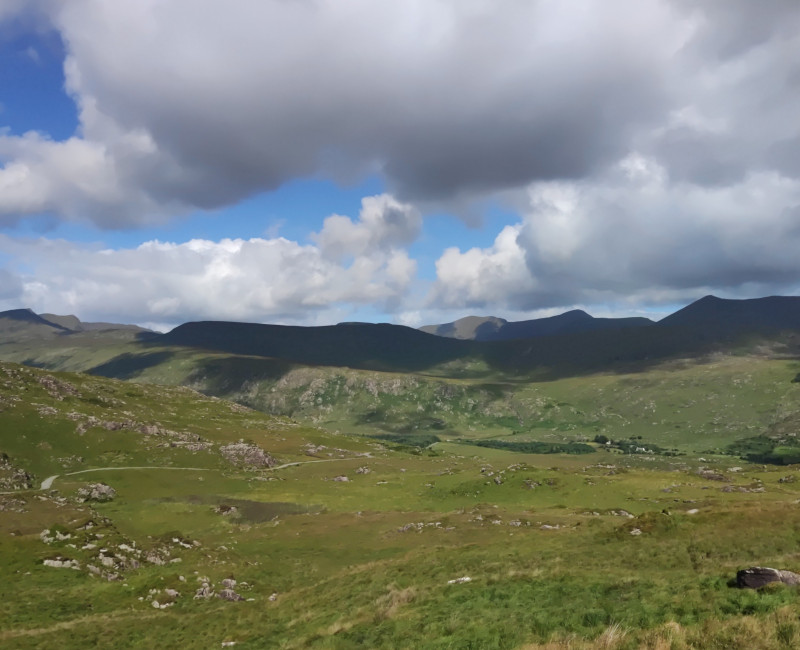 Rolling into town I immediately found an “eXpert” shop which is something like a Mediamarkt or Currys. I spent 5 minutes in the shop and walked out with a pair of ear buds, next to the shop was a cafe and I got my breakfast - 1 egg, some mushrooms, one hash brown, beans and one friend tomato, and two what I’m pretty sure were vegetarian sausages. Not the biggest breakfast (especially considering the €9.50 price) but I felt fortified, I also tried in vain to find a book shop - I will finish my book tonight.

The next 20 or so kilometers were fast, in the morning I did not think I would make it to the campsite at the end of the peninsular, but due to my early start and the fact that I had overestimated the distance, I was certain to make it with time to spare.

The road ran along the coast, offering a broad perspective of the Glencar mountains on the opposite peninsular. 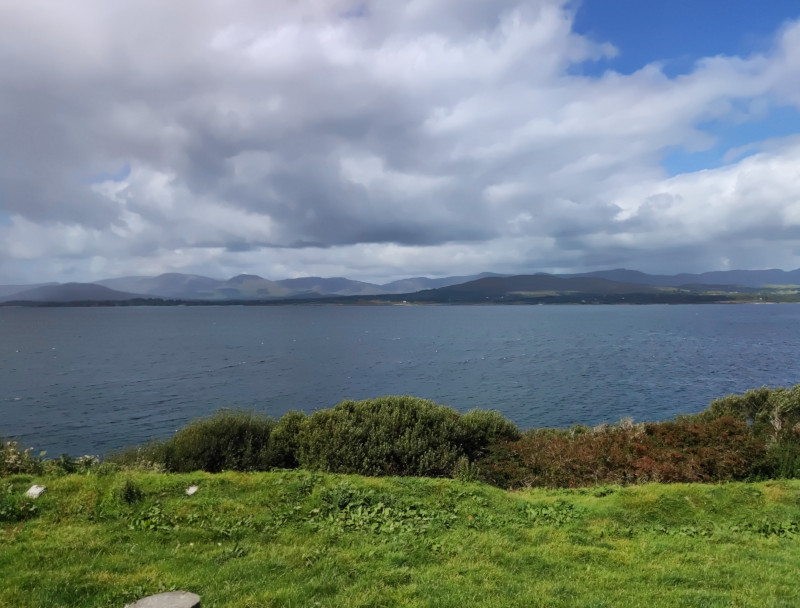 At one point the EV1 went into the village of Eyeries, and then, on my map, forked off towards the beach, leading to what appeared to be a dead-end. I turned back as I checked my map, but no, I was following the track, there was an overgrown grass lane which was signposted for walkers, and I assumed it was fine for the bicycle. My first doubt was when I was confronted with a gate and a ladder - the gate opened and I proceeded, only to be blocked further up by a ladder leading onto a bridge. At this point it was clear that this was not a bicycle track, and although I could have tossed my baggage over the river and carried the bike up the ladder and over the bridge, I decided to not risk further obstacles and I doubled back. 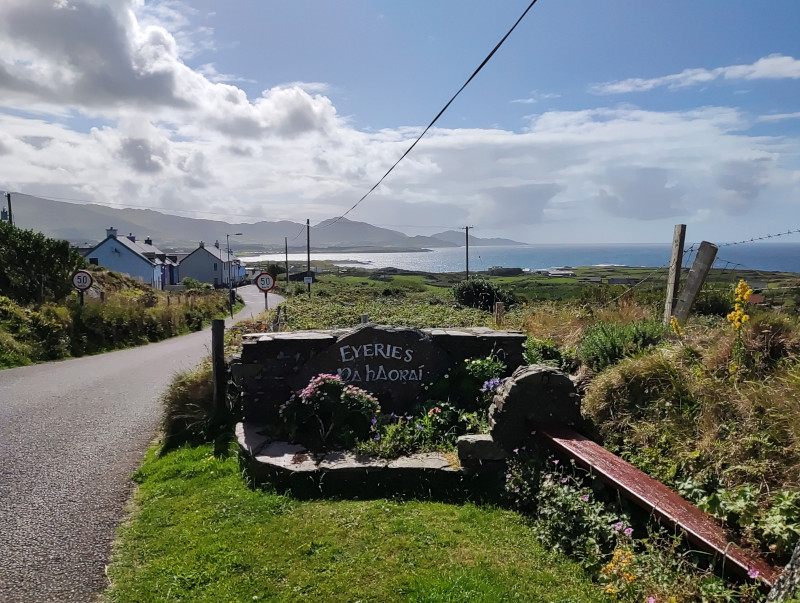 The final stretch, towards the end of the mountainous peninsular involved another “gap” pass, which was probably the steepest climb I’ve done yet, although not a long one. My legs were handling it, but I was concious that they couldn’t handle much more. The road from the descent led to an old Victorian copper mine, of which only a dangerous mine shaft and base of the tower of a steam pump were left. 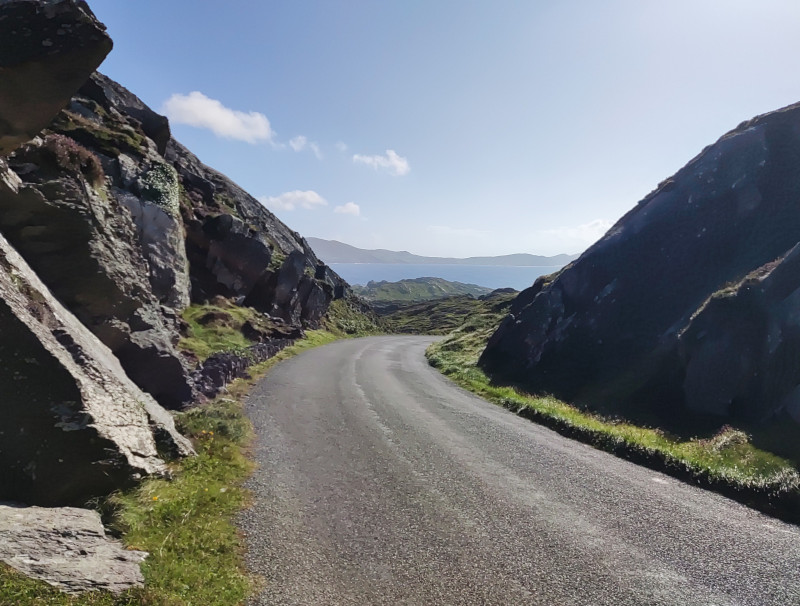 Finally I pulled into the campsite, there were no signs, nothing other than the camper vans and tents to indicate that it was a campsite. There was no reception. There was a waffle-wagon opposite the gate and I asked the girl there who I should contact “he will find you!” she said, “just pitch up” and she suggested some good spots on the field. 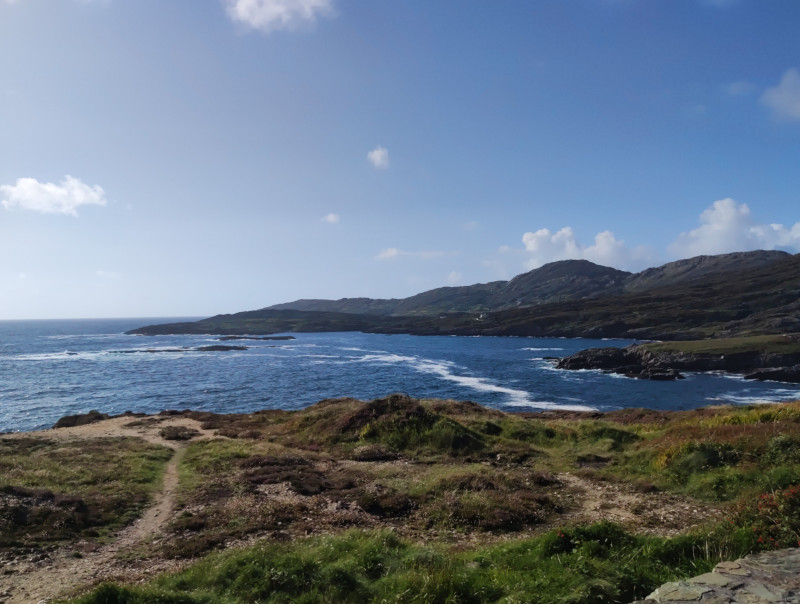