I’m finally sending this at lunchtime having failed to send this blog post yesterday evening. I’m sitting in a tourist information office which has WiFi. I seem to be in a region with very poor mobile phone coverage.

“How long you here for?” “In Ireland?” “No” “Just one night” “No, how long you been waitin’?” “About 10 minutes” “You rang the door bell on the Tardis and all that?” “Yeah” “I didn’t hear it” “Do you take card?” “No” and he thought pensively “But I’ll give you my bank account number … I trust your face” he said gesturing by pointing at his own face.

Today has been wet, wet and cloudy. But it didn’t start that way.

The campsite was peaceful last night, just the constant sound of waves, at times I could make out the sound of strong wind, which confused me as my tent wasn’t flapping about, and then I realised it was just an illusion created by the long sound of the tide.

There was no plan this morning other that to follow the cycle route and see how far I get. After dozing for about an hour I started packing my stuff up from the inside of the tent and was fully packed at around 8:30. I cycled over to the campsite facilities to use the toilet and fill my water bottles. The Waffle-Wagon girl was there, she asked me if I found a good place, I said that I did and we had a little chat. She was in a wet suit and had evidently been for a swim, I think I saw her earlier sitting on the beach wall in the early morning sun “are you going to Kenmere? there are standing stones and waterfalls, it’s beautiful” “I was there yesterday, I cycled past them”

I started cycling away, should I put my music on? I asked myself, why not. I pulled out my new ear buds, and to my horror the left one didn’t work. I had just bought this pair precisely because my left ear bud didn’t work on the old ones. I spent lots of time fiddling with it, if it was the battery, then why was the other bud at 100%? They had both been in the charger overnight. I tried resetting them, repairing them, everything I could think of. I made a plan to return them at the next “eXpert” shop.

Thinking that the next cafe was about 10k away, I had made the decision to try and get another cooked breakfast. It turned out that the next possiblity was around 30k away, so when I finally pulled into Castletownbere I was hungry. After asserting that there was no ear-bud-replacement shop in town I found a little cafe and parked my bike up.

The menu was “special” - there was no simple Full Irish Breakfast, there was a Vegetarian Delight and lots of other “speciality” breakfasts, but nothing simple. I got the Vegetarian option and was a bit dissapointed, a relatively small breakfast with Hullumi cheese, Spinach, vegetarian sausages, fried mushrooms and a fried cherry tomatoes, also the coffee wasn’t included so this nicely presented but disappointing breakfast cost me €12.50. 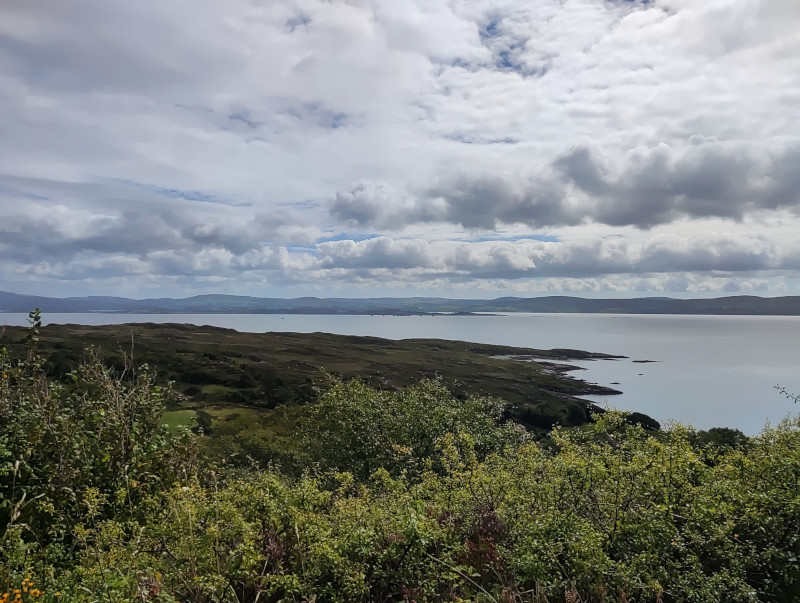 During this time I fiddled with my ear bugs, and as if by magic the left one lit up, and then to my disappointment stopped lighting up. I resolved to leave them in the charging case for an hour, and it was with relief that I heard sound coming out of both ear buds after this period had elapsed. So maybe just a charging issue.

Searching for accommodation, there was no camping site on my phone’s OSM map that was suited for the distance I wanted to make, there were no hostels, there was no affordable Air B&B, finally I tried Google Maps and discovered a camping site which was perfect. I phoned them twice with no answer, then they phoned me back and got confirmation that they could accommodate me.

My other task for today was to find a new book. Using my OSM map I located a bookstore on the way in the town of Bantry.

Bantry was another busy town with a one way traffic system. I parked my bike awkwardly outside the bookshop and had a look around, I got a book by an author that I’m not familiar with which had good reviews and was small enough to fit into my handlebar bag. There were some Ken Folet books I was tempted by, but they were 600 page monsters.

The weather was good up until this point and I had done about 50k by this point. In a direct line the campsite was perhaps 15k away, but I was going to follow the cycle route west to ride the Sheep’s Head peninsular and at this point the weather began to turn.

Two girls passed me going in the opposite direction as it began to rain, I waved and the second, a girl, and she did a first pump “courage!”.

It started as fine rain, almost a mist, but progressively got worse as I rode west on the peninsular, and soon I was soaked from top to bottom and it was relentless. It maybe took 2 or 3 hours to ride around the peninsular cycle route, but I didn’t see much at all. It was all cloud and wet. I took my phone out once to take a photo and made my phone wet. The thing about wet and bikes is that once something is wet it’s quit impossible to make it dry again without finding a shelter. The wet is contagious. 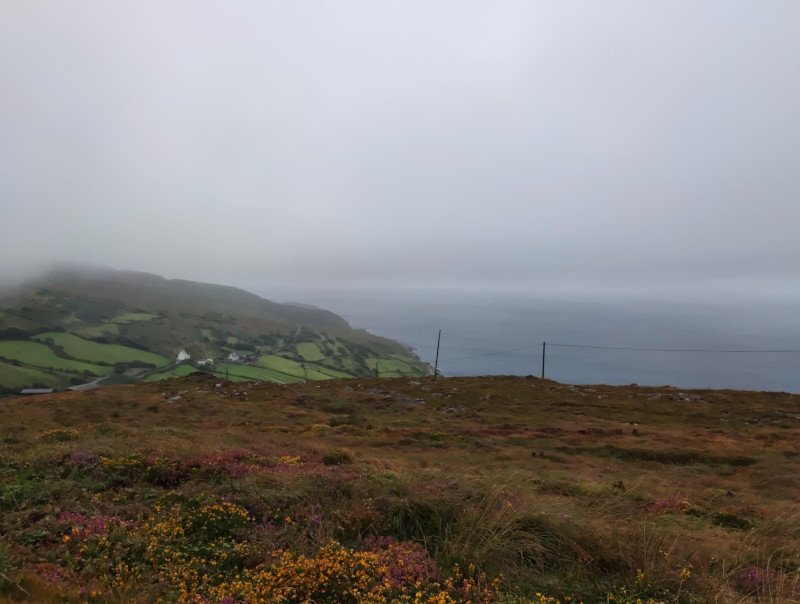 The cycle path rounded the peninsular with a steep 250m climb and thankfully the return journey was mostly downhill. It was still raining when I pulled into the village at the southern end, I was now less than 10k from the campsite and I needed some ingredients for dinner. 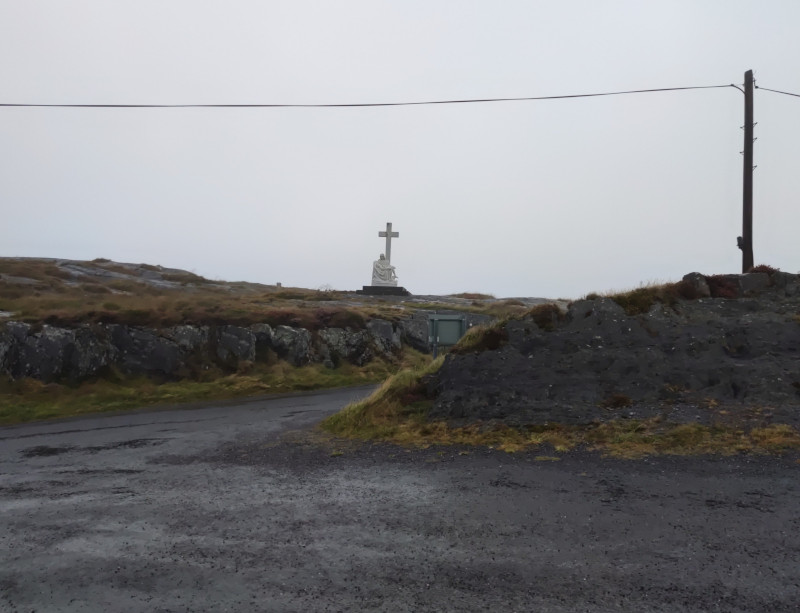 Before entering the shop I tried to brush the wet from my jacket and shorts. The lady in the shop was very friendly and talkative, and she called me “lovey”. I had a quick chat with her as I paid for my stuff, then on the way out I noticed some small french baguettes, I picked up two and went to pay, the lady was serving another customer, I waited then noticed she was looking at me “you can have those love” she said in a hushed voice “thanks!” I said perhaps too loudly and walked out and the rain had stopped.

I was feeling a bit exposed. My shirt under my rain jacket was soaking wet as were my shorts and underwear. My feet were bare in my sandals and I had no gloves on and I found it hard to change the gears with my thumbs and fingers. I was looking forward to a hot shower.

At the campsite, after promising to transfer the amount owed to Paddy’s bank account, I set up my tent and made my way to the kitchen and showers. Two French women were eating dinner in the kitchen, they are cycling from Cork to Tralee and doing about 60k a day. I made a coffee, outside there was a shelter with comfy chairs and I sat down in one of them and smoked a cigarette and drank my coffee and could feel the warmth spreading through my body.

There is no WiFi at the campsite and it seems to be in a dead-spot for the mobile. I will need to go for a walk to upload this blog.