I slept well last night and in the morning performed my usual routine of packing up my stuff and emerging from the tent. I went up to the campers kitchen for coffee and to see what I could eat for breakfast. The two French girls were already there and were discussing there plans for the day. I put the kettle on and started unloading my food bag for inspection: Penguin bars, beer snacks, yoghurt covered raisins, 3/4 of a demi-baguette. “Do you need anything?” one of the girls “yes, breakfast” was the thought that went through my mind as I looked at their well prepared spread but instead I said “no, I’m fine” and looked at my variously aged snacks as if it were self evident. “We have honey, there”. The toaster didn’t work so I put my 3/4 demi-baguette in the microwave for 10 seconds and spread honey on it. Breakfast.

I pulled out of the campsite and saw the two girls leaving behind me, in my direction. “that’s not right” I thought, they should be going the other way, I waited, intending to helpfully put them right “no, this is our way”. Of course it was me that had started in the wrong direction.

Today I would round the final peninsular, which in some ways marks the beginning of the end of my tour. Although potentially there is more to see yet, and I may well be cycling the south coast of Wales.

The French girls told me that the scenery would be nice for me, it was distinctively beautiful and less mountainous than the previous peninsulas.

After cycling 35k I decided it would be good to get a proper breakfast, the first village I got to had a cafe, which was busy. They didn’t serve cooked breakfasts, but they had sandwiches, crucially however they didn’t have WiFi, and perhaps even more crucially they didn’t take card payments and I had no cash. 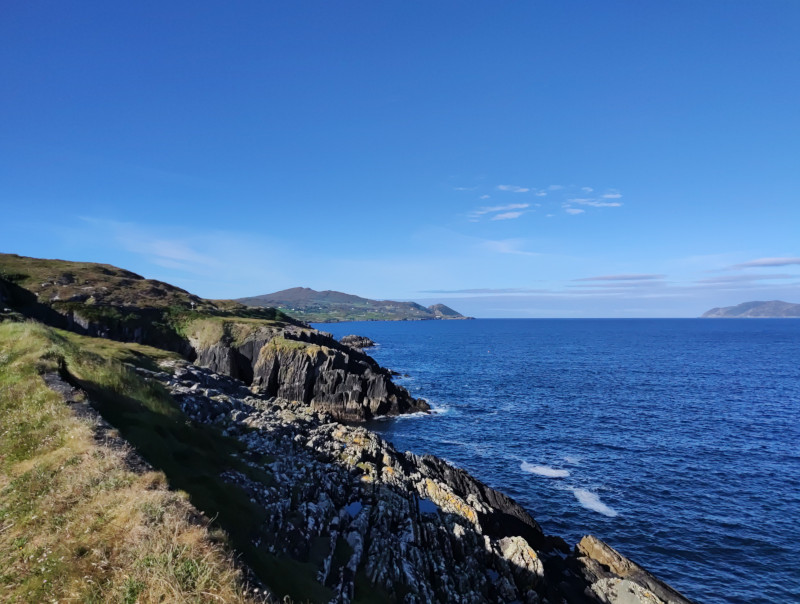 My blog post from the previous evening remained offline - there was no WiFi on the campsite and I had thought I was in a black-spot for phone reception. It was only several hours later I questioned my hypotheses and realised that I had in-fact used all my data allowance. For now I needed to upload my blog post though.

There was a tourist information office, which had no coffee but it did have a “free” WiFi connection which required me to “register” - I entered a fake email address and was immediately connected to the internet. I stuffed my face with beer snacks and penguin bars and was on my way again. 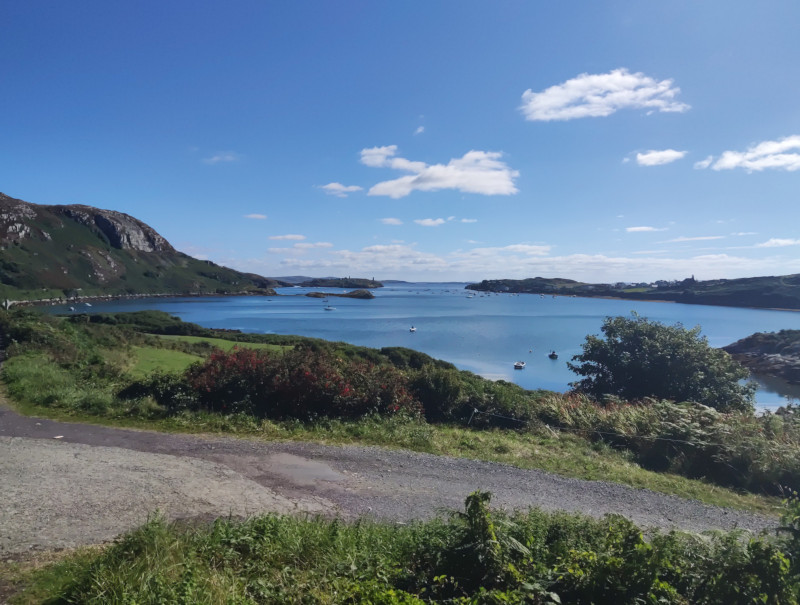 20k on I found another cafe and walked in, saw the high prices, and after decided to get a €10 sandwich “do you want a drink?” “god no” “table water?” “ok then”. The sandwich (or wrap) was actually quite sizable and filled me up, although I don’t think it gave me the energy that a full cooked breakfast would have done.

After hitting the south coast and leaving the peninsular, the cycle route became a bit more erratic, and it was tempting to stay on the main road, but I didn’t give in and turned into the difficult country lanes and was rewarded by some nice coast lines which, for the sake of cycling past them, were probably not worth the large amount of effort involved in tackling the hills that protected them. There were a couple of beaches on the way, and I could have gone for a swim, knowing at that point that I would be at a campsite in a few hours and could shower the salt from my body. Regretfully I didn’t. 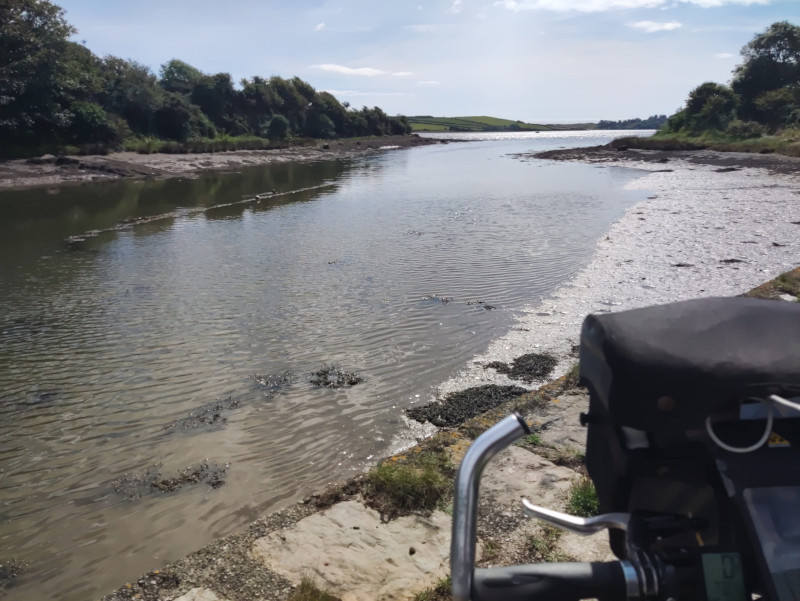 I stopped in Skibbereen and investigated my internet connection issues. I found a text message (in German) “You’ve used up your high speed data allowance, reply with “SURF 1” to get another 700mb for €4.99. It turns out that “high speed” is regular speed, and normal speed seems to be about 8 bytes a second (my internet was working, it would just take 1 minute to load an image). I gave in and paid for another 700MB and only then realised that my allowance would be reset with my billing period which would start again in 2 days. Still, 2 days of internet is just about worth the price of an Irish pint of larger.

The campsite I was heading to was “The Meadow” just outside of the village of Glendore. Whilst I had no internet I had no other information about it. I read the reviews, which were a mixed bag. I had the impression it would be very basic, but I phoned ahead and got confirmation that they could accomodate me and that they close at 9PM giving me about 4 hours to get there. 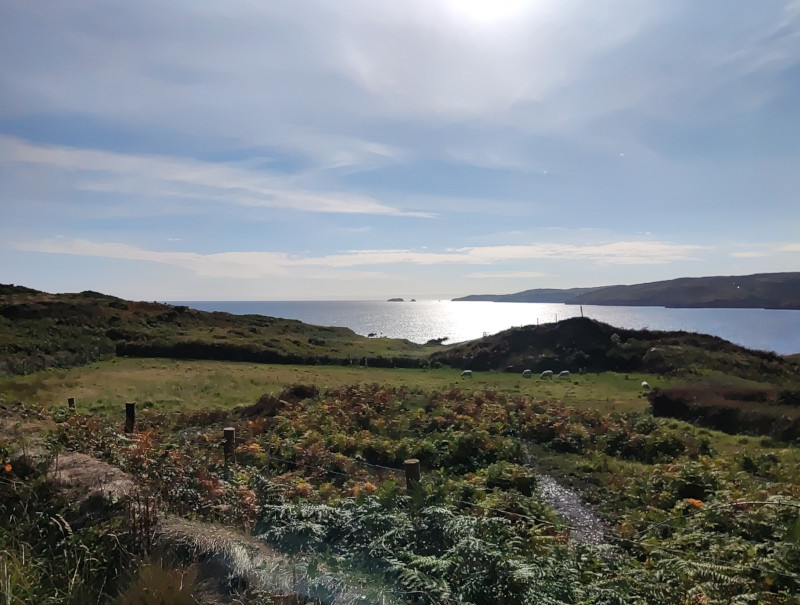 I could have gotten there in 45 minutes, but I decided once again to take the scenic route - and it was grueling, hills and hills and hills. Towards the end I felt I was running on fumes and was counting the meters down as I approached the campsite, which was on a hill.

Hills (or mountains) are fine - as long as I have some energy. But when one is exhausted it’s a mild kind of torture.

Now I’m on the south coast - riding West. Part of me is thinking that my work here is done and I should concentrate on cycling the remaining distance to th south-east corner as quickly as possible and cross over to Wales.

This campsite had mixed reviews but it’s actually quite good. I’m sitting at a desk in the “dining” room and it seems as if it will be a quiet night.