Today is another “sit cross legged in the tent and write a blog post” day, the last time I was sitting by the beach, today I am in a very generic campsite off the side of a dual carriageway. I’m cooking pasta, pasta which I realised I didn’t have 30 minutes ago. I had cheese, pasta sauce, but to my shock, no pasta. So I just got back from an additional cycle ride to the nearest shop 1 kilometer away.

I slept like a log last night, and left the campsite relatively late at 9:30am. This makes a big difference, if I leave at 8am I will probably finish 50k by lunchtime and be “done” by 4 or 5, leaving at 10 I’d have done maybe only 20-30k by lunch time and would feel the weight of the remaining kilometers. I don’t have to cycle 100k a day, but it’s good to have a target.

This morning I decided that I would take the most direct route east, although avoiding major roads where possible, only following the EV1 where convenient. I’ve been on the road now for 3 weeks, and I’d like to be back in Weymouth in a week, although it will perhaps be a bit longer.

While the past 3 weeks have mostly been spent climbing hills and taking in scenery, today was more “just follow the road” - I listened to my music for at least 4 hours straight before the batteries ran out, and then another hour or so after they were charged again. As you can tell by the time (approx. 7 hours) and the distance of 100k, it wasn’t all full-speed-ahead, and there were hills and diversions, but today felt much more like travelling and not “sightseeing”.

But there were sights to be seen on the way, the Timoleague Friary, for example, which was burnt down by the English in 1642 “we burnt down the towne and the great Abbey, in which there were some thousands barrels of wine” after the abbey there was a prolonged and easy stretch around the edge of the large natural harbour. 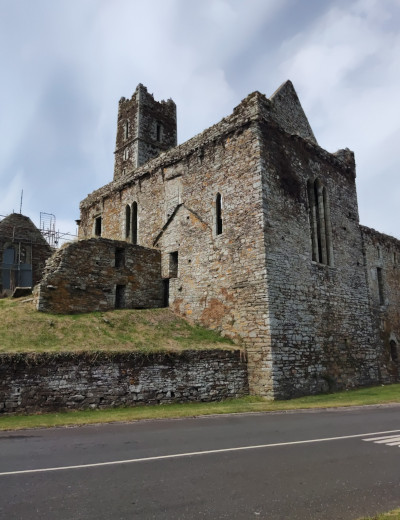 I stopped first in Clonakilty, and, after being frustrated by the one-way traffic running though the main street, it struck me again that none of the towns in the Republic of Ireland seem to have pedestrianised centers, something that is mostly taken for granted in the UK (or at least England). In order to go back to the bottom of the main street I either needed to carry on and ride back on the bypass, or walk my big, laden, bike on the narrow pavement. I got a drink and a reasonably large “Crunch” chocoloate bar and left the town, stopping on the way out by a grotto which “was the voluntary effort of the people of Clonakilty to honour the centenary if the definition of the doctrine of the Immaculate Conception by …”. It featured a commonly depicted scene of Mary on high, her hand raised in blessing, and another character below looking up at her in expectation, perhaps praying.

“Insomnia Coffee - it’s good to stay awake” is the common catchphrase I hear in supermarkets in Ireland, and there is no sense of humour. All supermarkets and convenience stores have coffee machines, and the coffee is not cheaper then coffee shops.

My next coffee was in Kinsale, here I visited the Centra supermarket. In addition to the ubiquitous coffee machine they also make fresh sandwiches and pizzas and they offer indoor seating and a customer toilet. I had a late, post-chocolate bar, lunch. “Have you got a ploughmans” “what?” “cheese and pickle” “eh?” “cheese and chutney?” “…” “we have relish?” “yes, that”. I got a sizable cheese, relish and salad roll and a coffee for around €6.50 which is probably the best value I’ve achieved in Ireland so far.

Carragiline was the next town, and a nice town it was. Not so far from Cork which I have now passed under. It was here that I took a very short ferry ride. As I approached I could see the cars rolling on and I accelerated to around 33kmph and just managed to get on. When the guy came to collect the fare “It’ll be 2 euro” I checked my wallet, I only had a 20 euro note, I offered it “nah, y’alright. I’ll getcha next time”. 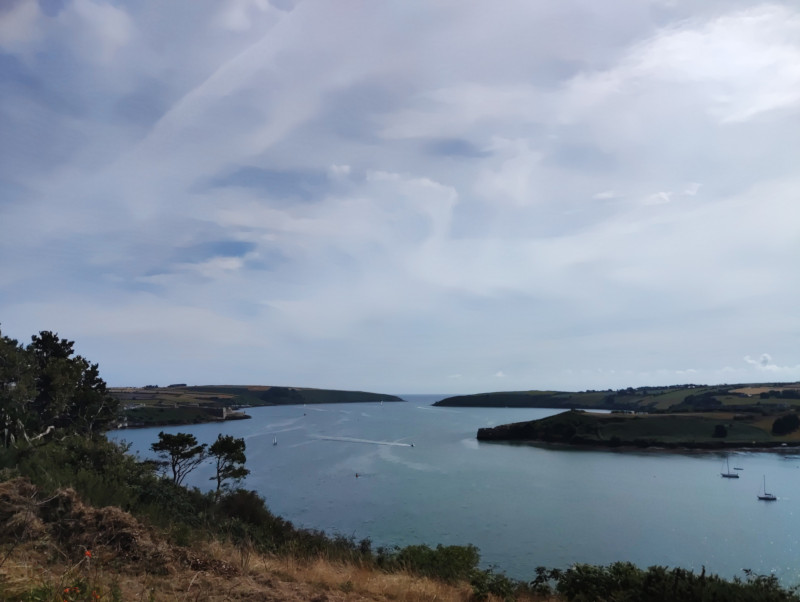 From here it was a 45 minutes ride to the campsite, which I had not succeeded in contacting. I rode in and saw a big field with plenty of space. I rang the bell in the reception but nothing happened, finally a man walked in, but he was also trying to contact the proprietor, I had a chat. He said there was a Australian girl on the campsite cycling around Europe which is quite impressive, maybe I’ll get a chance to say hello. Finally the lady turned up and I paid for my pitch. 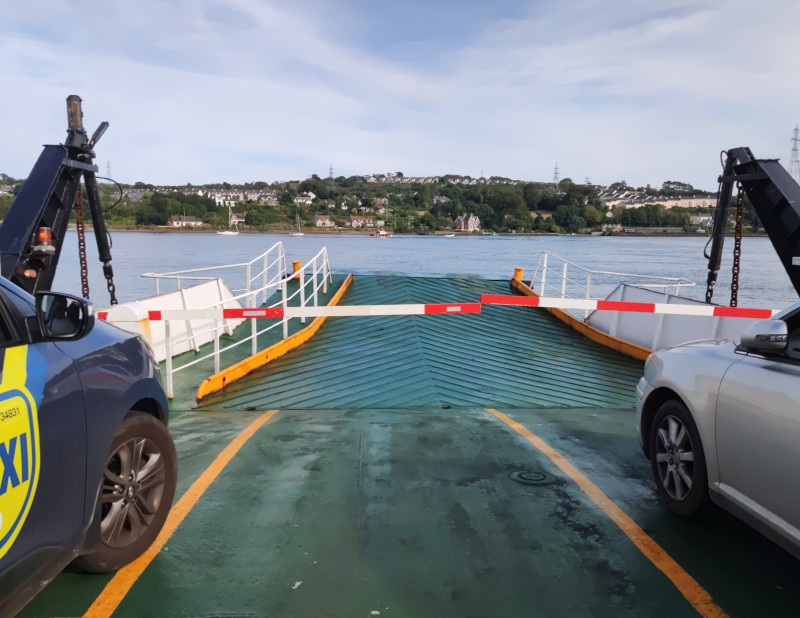