This is the day before last, the penultimate day, the day where I cycle to the town where went to University and got my first job, Bath.

It was good to sleep in a bed. When I got in last night, before 10pm, the house was quiet and the lights were off, I crept upstairs to use the bathroom as I assumed at least 3 people were sleeping. I woke early, as could be expected when going to bed at 10am, and lazily used the internet checking in on my open-source project and briefly interacting with somebody who was developing an extension for it. I made a coffee in the kitchen, leaving the door of my room (which is next to it) open. A child, maybe six years old, came down the stairs, stared at the open door for some seconds before turning to see me in the kitchen, I waved and said hello, but he ignored me, came in, opened the door, let the dog in and then left. Soon after I wheeled my bicycle outside and was on my way.

I’m now on slightly familiar territory, I’ve cycled to Pontypool at least twice, but this time I’m equipped with a cycle map and would not be navigating by the use of road signs and major roads.

I’m now sitting in a busy Pizzeria in bath, there is a hum about me, I’ve just ordered a pizza and am drinking a very cool, large, beer.

From Cymbran I headed south to Newport, passing what I assume is Newport castle and following the Usk River, a flat cycle route which was pleasant. As I crossed over a bridge I saw the Newport Transporter bridge, a huge structure built in 1906 which, instead of providing a continuous surface for cars to traverse, transports a section of road from one side to the other. 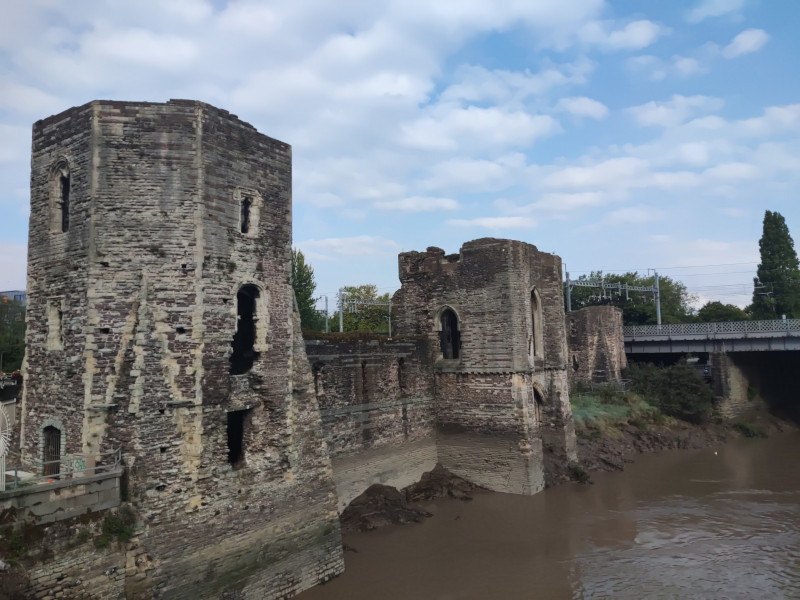 I hadn’t had a real breakfast, only a coffee at the Air B&B and a single, small, pain-au-choclat that I had, so I was looking for a good cooked breakfast. 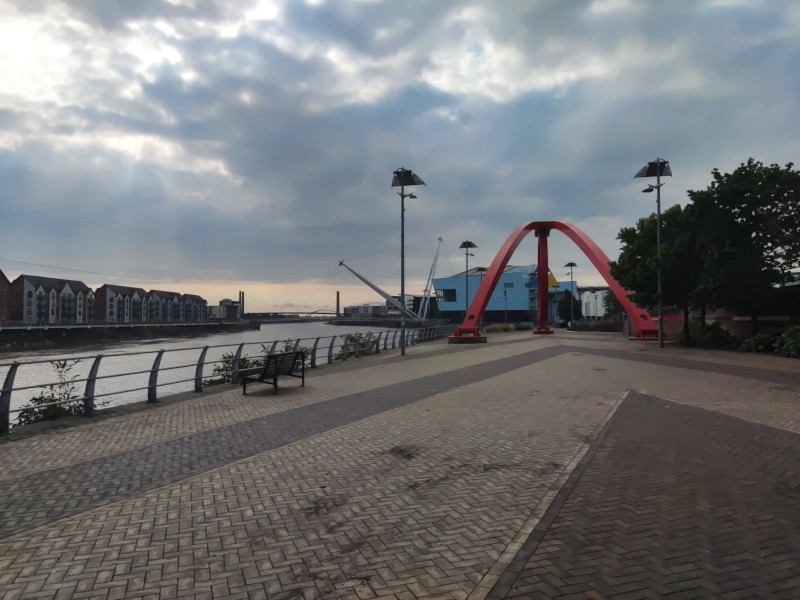 The cycle route became boring quickly, it was running along very bland lanes which turned at right angles, and were going to add at least 10k to my journey time when there was a “perfectly good” more busy road which ran directly to the town I had decided to find breakfast in - Caldicot. The road was fine, a but busy, but I was able to turn on to a quieter road after a short time.

At Calidcot I found what I was looking for, a place that did breakfasts for locals. The customers were mostly in high-vis jackets and wearing work boots, perhaps dock workers, or bridge workers, or similar. I ordered a vegetarian breakfast, as I did I noticed the huge size of the breakfasts being brought out to other tables. They were busy and I waited maybe 20 minutes. It was a trucker’s breakfast, very substantial, with no attention to presentation. It didn’t taste as good as the meagre, finely presented, breakfasts on the tourist trail in Ireland, but it was what I needed. 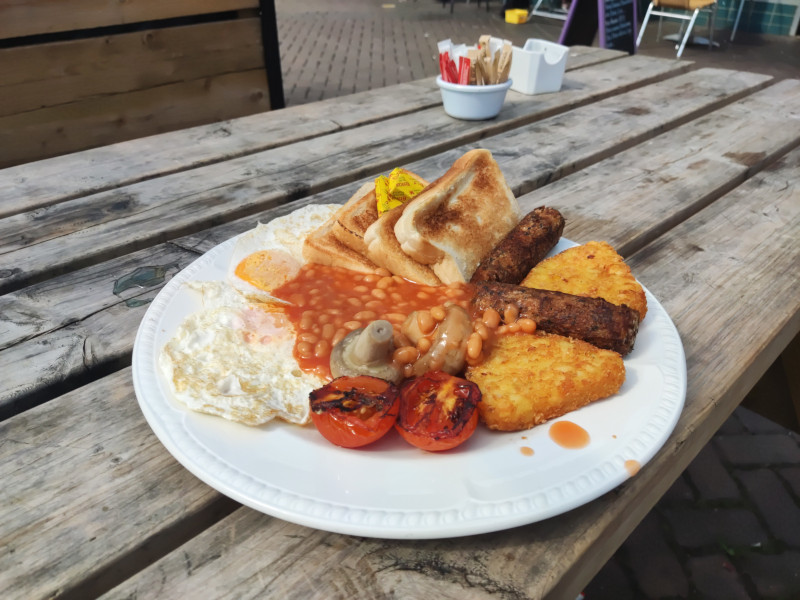 From Caldicot I was ready to cross the River Severn. There are two bridges over the river Severn, the old one and the new one. I was crossing the “old” one, which is a suspension bridge running 1.6 kilometers and built in 1966, as you cross you can see the “new” bridge further down the river and the heavy electricity cables spanning the entire river from one side to the other. 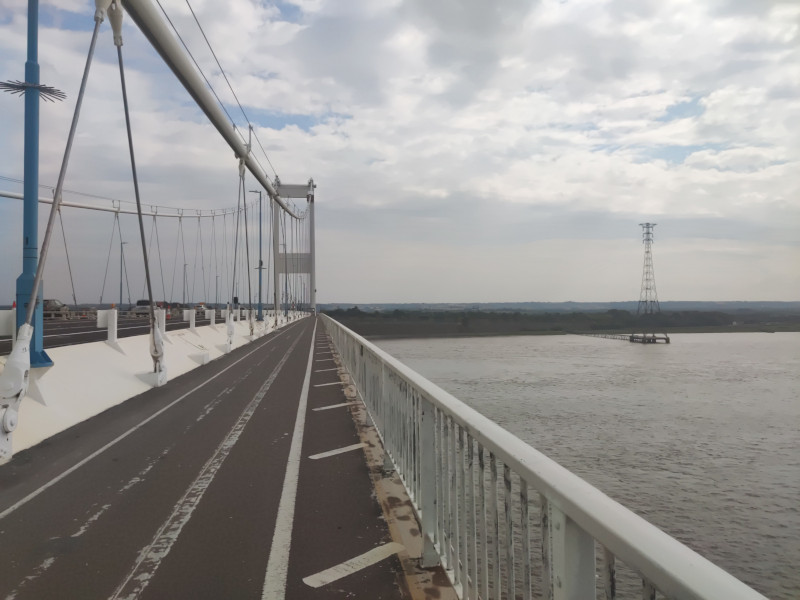 On the other side of the bridge I was in England, and the cycle path ran over what seemed like abandoned road infrastructure, old bridges, old roads, which were big enough however to carry significant traffic, but now used only by occasional traffic and cyclists.

At one point the cycle path had a detour, it approached the major road - a constant stream of large freight lorries - and directed you to turn right. I peeped right and there was no cycle path, just lorries rushing towards you. I turned back assuming there was an error, but it said “Route 4 cycle route closed” so I was forced to cross 4 lanes of traffic to get to the right side of the road and cycle, holding up a convoy of lorries. When I saw another cycle tourer coming the other way, also with a fleet of lorries behind him I felt better.

I joined the EV1 again which ran to the center of Bristol, the further I got to the center the more confusing it became. The traffic was very intense and the cycle route would change direction sharply down small alleys, and I often missed the turnings as the signage was either drowned in the visual city noise or missing completely. I may have cursed out loud several times, and as usual my main priority when passing through a city is to exit the city as soon as possible. 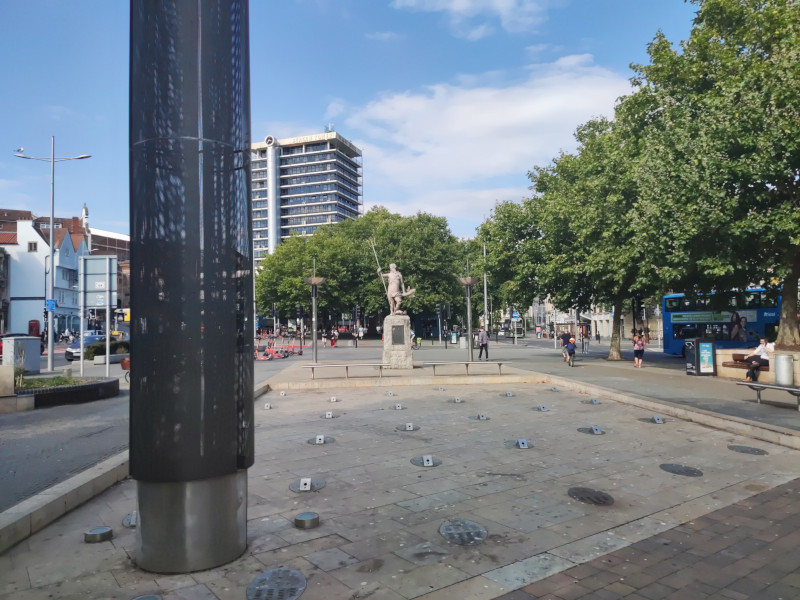 There is a cycle path that runs from Bristol to Bath, a greenway based on an old train line. I noticed however that it is not a direct route, and would add 10 or more kilometers to the trip, the most direct route is via. Keynsham, a town in between Bristol and Bath and where I somehow was living for my first year of study at the University.

I must have cycled this route multiple times, but it was maybe 20 years ago. Some things were familiar, the strangest thing was that in Keynsham I didn’t recognise anything at all from my time living there. Perhaps I never left the house except to got to the train station.

After Keynsham I continued on the road to Saltford where the road converged closely with the Bath to Bristol cycle path and I was in familiar surroundings and the cycle path ran up alongside the canal, and I found a bicycle shop and got a new gear cable.

Over the past week I’ve noticed that my gear lever was getting stuck, I recognized this symptom from previous tours and stopped my bike and lay my head on the ground to inspect the place where the cables run under the crank shaft, and confirmed my suspicion that the gear cable was frayed - the wire was coming to pieces from the friction of rubbing against the bottom of the frame, it means the cable will break in half at some point, I noticed it became very sticky today and decided to stop changing the rear gear except where absolutely necessary. Replacing the gear cable isn’t a big job, and I should be able to do it before leaving tomorrow.

I got to the YMCA hostel in Bath and the man let me put the bike in the office overnight, although I probably could have locked it up outside and put my luggage in the luggage room. The dormitory is for 12 people and there are 4 bunk beds for 3 people each. So chances of a good nights rest are not guaranteed.

After showering I left the hostel to walk around the city that I spent a significant part of my life in. Lots of memories came back to me, supermarkets I used to shop in, pubs which we used to drink in, people I knew then but I knew that I wouldn’t find any of them in the crowds today. People from my student days, musicians I used to know, and people I worked with in my first job.

Lots has changed in the 11 or so years since I left. The music shop is now a hair dressers, one of the most pubs we used to frequent the most has turned into a restaurant, a run down area which I used to live in has completely knocked down and rebuilt with only the old bridge remaining. Cities never stay the same.