« Encountering Go as a PHP developer
The Best Container »

This is the first (and hopefully not the last) monthly release, the full changelog is on the release page. I’ll run through some of the highlights in this post.

Thanks to the perserverance mamazu there is now a code action to generate a decorator:

This is an LSP only action, and must be invoked in a file with an empty class which implements one or more interfaces.

I’m really happy to see this, I don’t use decorators often, but when I do I always think “this should be automated”. Now it is 🎉

This is a very minor feature, but also surprisingly useful. Before the ticket was raised I hadn’t really considered it.

Given you on method in a class which is implementing an interface (<> below):

The code for generics has been improved significantly, and while there are still some features to come (e.g. injecting template vars through the constructor) these features will now be much easier to implement.

The last feature is quite exciting:

Given the following class:

When you call $foobar = $container->get(Foobar::class) Phpactor will be able to infer that $foobar is an object of type Foobar.

A wild usage can be seen in the valinor library, something like: 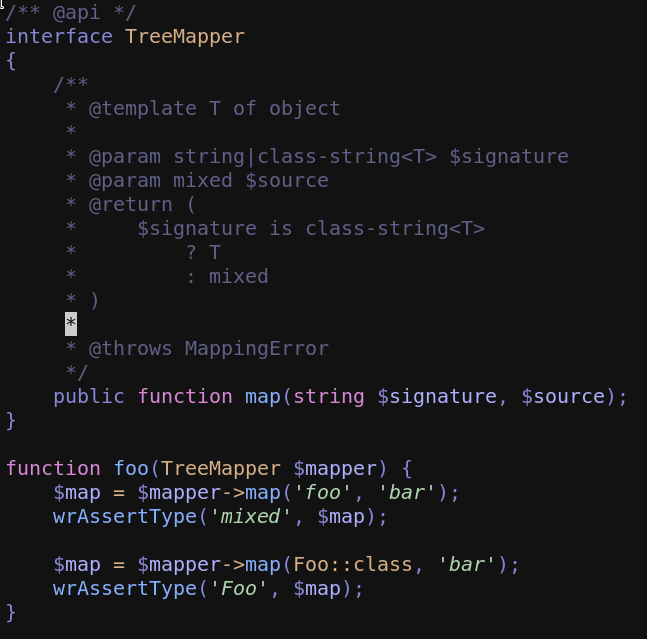 Previously Phpactor used PHPStorm stubs exclusively (by default at least) - that was until I realised that a bug with enums was caused by this library - namely that the interface BackedEnum has a property. The parser wasn’t happy about that and subsequently enums had no method completion.

Phpactor now has a few “dedicated” stubs. This allows us to fix the enum “issue” above, and also, mainly for testing purposes, be able to depend on fundamental stubs like Iterable, ArrayAccess, IteratorAggregate, etc.

There are more bug fixes and improvements listed in the changelog, including a significant performance improvement for large documents.

I know that performance is still an issue, especially with very large and complicated source files. I’ve been thinking about ways to improve it. One possible way would be to distribute the language server work over multiple processes (e.g. diagnostics, completion, code actions, etc), which would allow the use of multiple cores. This isn’t trivial however and adds more complexity.

Next month should see the final pieces of the generics puzzle fall into place.

« Encountering Go as a PHP developer
The Best Container »