Another troublesome day with the bike.

As I settled down in my tent last night there was a group of four or five teenagers in the tent next to mine who were talking and laughing until midnight, and somehow, although they were not being overly loud, managed to annoy me as I was trying to read. At 4:30am there was a crash of thunder (but no rain) which woke me up, and I guess most other people on the campsite including my neighbors, but they were the only ones who decided to chat about it for half-an-hour.

The temperature is better at night now, probably because I am further south, but perhaps also owing to the weather. Today was also hot, but with lots of humidity too.

133k (but think this was the motorway distance)

Before leaving the campsite I tried to use the internet and investigate a possible hostel in Gothenburg and check the train and ferry times, but the connection was awful, and I gave up, deciding instead to head to a campsite in Kungalv, which is 10 from the city. I’m hoping I will be able to make the complete jounrey back to Berlin tomorrow - getting the train from Gothenburg to Malmo, then cycling to Trelleborg to get the ferry - but as yet I still don’t know when the boat sails or how much it will cost.

It was going to be a longish journey, at least 133km, more like 150 to the city itself, but the terrain is relatively flat, so I was able to make good time, following the motorway with the minor roads.

I stopped in a Swedish supermarket, the prices seem somewhat cheaper than Norway, but it’s difficult to be sure as I don’t know the conversion rate. Both countries use the term “Krona” but they are different currencies, but I believe the conversion rate is similar. 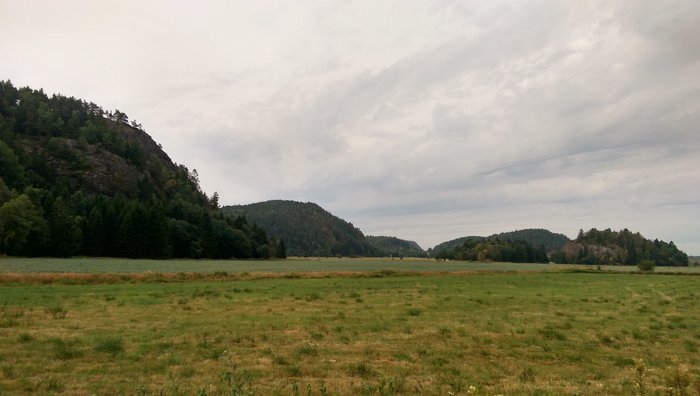 There was a slightly different selection of food, and I got a small ready-to-eat garlic baguette and a pastry, a bar of chocolate a can of beans and an onion.

The sky was stormy and as I approached the city of Uddevala there were gusts of wind and very dark clouds and the occasional clap of thunder and lightning and then it started raining, but not very hard. I had covered about 70km when I sat down for lunch on a bench in the rain.

After navigating out of the city, and riding about 10km I had a puncture. The first puncture of this tour. An inconvenience, but also a coincidence, could it really be unrelated to the problems I had yesterday?

I pulled up and removed the wheel and the inner tube. I partially inflated the tube, held it in front of my upper lip and rotated it (the lip is sensitive enough to detect the escaping air). I couldn’t find anything on the outside, so I inverted it and checked the inside. There was a puncture on the inside next to the valve.

I soon realized my mistake - when I changed the wheel yesterday, I didn’t put any tape around the inside of the wheel. The wheel is punctuated by holes for the spokes, and without tape the inner-tube can rub against the metal edges of the holes. This is how the puncture happened.

I didn’t have any tape, but I had a length of material which, while not surrounding the whole wheel, would cover maybe 30% of it, which might do for the remainder of the journey. 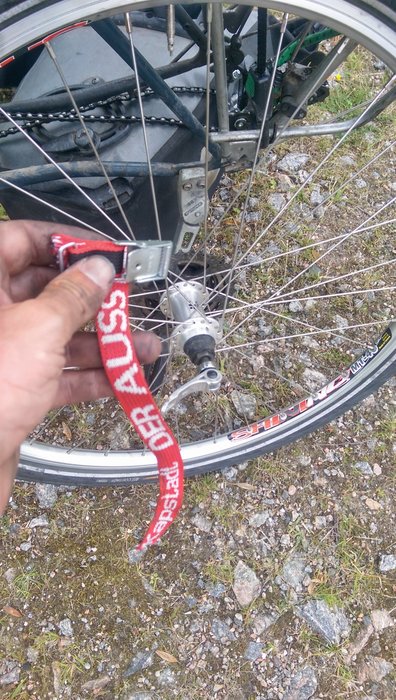 The puncture was near the valve, which is unfortunate as it was near a ridge. I roughed up area down, applied a repair-patch, held it there for a minute and then re-inflated the tire and started putting the wheel on. It is an energy consuming process, so I was more than a bit pissed off when I heard the air suddenly rushing out as I secured the wheel. Off it came again! I decided to use my spare inner tube.

The spare inner tube had a different valve, but that was fine because my pump could be converted to that valve, I went to put some air in it, but the pump didn’t work - the pump was broken. It worked for the “french” valve, but not the car valve. I couldn’t use my spare inner tube.

I tried again to repair the other inner tube, and paid special attention to try and make it stick as best as possible on the ridge near the valve, I was pretty sure it wouldn’t hold out long, but maybe, maybe it would.

I got the wheel on, and inflated the tire to a reasonable pressure and started off - if I could get 20km from it, then I could reasonably walk or run the remaining 20km. But it didn’t last 20km, it lasted about 10km. I couldn’t fix it so now I was walking. 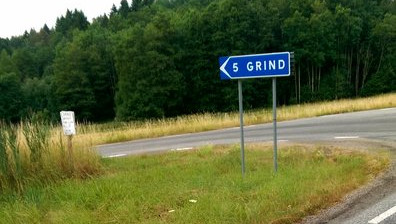 I walked past a house, and could see some people. The house was actually under construction and the people I could see were builders, I walked up the drive way and waved, but they didn’t have a pump.

I carried on, it was 5km to the next village, which was an hours walk. I took off my sandals and put my trainers on and began to jog with the bike, doubling my speed (at least). I looked around at the houses I passed to see if I could see anybody, or if I could see a house with bikes outside. There were quite a few houses, but I didn’t want to invest my time walking up drive ways and knocking on doors only to find that nobody was home or they didn’t have a pump.

Eventually I saw a house with a garage and van outside, and a man was in the van. I made my way towards him and waved and he waved back.

“Svenska? Engelsk? English?” “English” I replied. “Where are you from?” “Weymouth” and he looked confused. I thought for some reason that our first question identified my country not my language. “If you go south from Bristol to the coast you are there, but I live in Berlin”.

I don’t think I even mentioned what the problem was before he said with an Australian twang “You’ve come to the right place, bring the bike into the garage”

He walked around and opened the garage doors. It was a large workshop with two motor-cross motorcycles, loads of tools, a car and a few bikes. He offered me a shower and even offered to wash my clothes and give me a lift

to the town I was headed to (where he happened to work). He spoke in an Australian accent and had spent two and half years in Australia, originally intending to go there for 3 months.

He helped me get the tire off and found some tape to wrap around the inside of the wheel, and helped me put the tire back on the wheel (I was struggling and mentioned that sometimes it’s easy and sometimes it’s hard, he pointed out that the tire was not tucked in on the other side, and when that was fixed the tire fit easily). He offered me a cold, non-alcoholic beer which I accepted

I don’t think I could have found a better house to call on. His name was Daniel and he is a carpenter, mechanic and a motocross champion and was preparing his bike for a tournament at the weekend.

After finishing my beer I took my leave, it wished me luck with my journey and I wished him luck with his tournament.

To think, all of the problems I have had over the past two days have been because of a snapped gear cable and not trimming the end of the replacement. 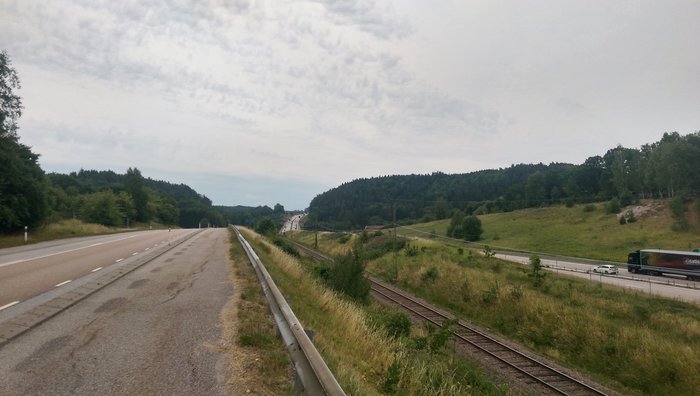 Riding by the motorway

I cycled onwards, I still had about 50k to cover. I managed to stay mostly on quiet roads. Daniel showed me where I could find a bike shop (or a massive super store that sells just about everything) - I still need to buy a new pump and a new replacement inner tube. But I decided instead to head straight to the camping. I have only 10k to do tomorrow, and am feeling confident that the bike will hold up.

All of this time I thought it was earlier than it was, and was getting to the campsite at 18:00, I pulled in but couldn’t see the reception, so I asked a man coming out the kitchen - “It’s round the front, but I think it may be closed”. I thought that strange, as it was only 18:00. They were not closed and I went in and asked. A young girl said, “I’m not sure we have room, maybe you can go and have a look, we have tent places here and here” she pointed on the map and passed it to me.

There was place, but the campsite is really full. There are a number of dogs in little corrals attached to caravans. On the way in to the town I passed a huge field full of tents. All the tents were of the same basic form and ranked close together, it didn’t look like a campsite, I wondered if it were a refugee camp, but the people didn’t look like refugees, and then looking closer I could see the tents largely contained dogs in cages. And between the tents were obstacle courses. It was some kind of large dog festival.

So the campsite is full, and there is a dog festival. My watch was on “dual time” - it was two hours behind. But everything is good. The girl just came in (at 22:30) and offered me a coffee, as they were pouring the last of it down the drain. I have been left inside the main reception building in a very comfortable room (I can leave, but the door is locked for re-entry).

Now, after this blog post I need to find out when the trains leave (although I think they are hourly) and when the ferry leaves, how much it costs, etc.). Tomorrow I hope to be in Berlin!