I am now sitting on my cheap Ikea office chair typing this blog post on my desk in my apartment in Berlin.

This morning I woke first naturally at 4:30am, and then was woken again by the alarm clock on my phone at 5am. I raised myself in my sleeping bag and unzipped the panel which opens onto the “porch” of my tent. I had no muesli today, but had good bread, and I pasted it with jam and had my coffee and read the one day old news on my phone (there was no Wifi at the campsite).

I was advised to be at the ferry port at 6:30am for the 7:30am sailing, but I wanted to be there at 6am to give myself some breathing space. I was only 2km from the ferry port, and I left the campsite at 5:50am, and arrived at around 6:10am.

I was told that I could wait in “here” in the lounge or outside and at 7am somebody would “open the gate”. I said I would wait outside assuming there was another lounge, but upon investigation it was just a fence with a gate, and I returned to the lounge and waited with some other passengers.

A man in a high-vis jacket came in and started ushering people towards the door, he consulted the girl at the check-in and she pointed at me and he beckoned me to come too and I was allowed to put my bike on the bus which drove onto the ferry.

I wasn’t 100% sure that I was heading to the correct ferry, as we were driving towards a ferry with “Sassnitz” written in large letters on its hull, but we passed it and drove up a ramp towards a ferry with no discernible writing on the side, but given there were only two sailings I was happy to assume this was the Rostock ferry.

The bus driver waved me towards the end of the ferry and I free-wheeled my bike in that direction and another ferry operative made arm gestures towards the other bikes and I made the same arm gesture back and nodded. There were several bikes tied to the bars at the front of the car deck. There were no more “ties” however, so I just parked my bike with the kick-stand and made my way to the stairs.

After being lost for several minutes in the corridors and car levels I found my way to some of the passenger lounges. People were already there sleeping on the floor, some had brought duvets up from their cars. I suppose some people must have had a very early start or may not have even slept at all. One of the rooms smelt very badly of sewage, which is a shame as it was the room with the most comfortable chairs.

People were by this time helping themselves to breakfast, I got myself a coffee and a chocolate muffin and sat down and worked on my software project for a while, there was free Wifi, even if it was very slow indeed. I had a missed (whats-app) call from my mother which I only noticed when I connected to the Wifi, and I rang her. She was still sleeping, I didn’t consider that it was 6am in England.

I did some reading on the ferry, and dozed a bit and worked a bit. We got into Rostock at around 13:30, making it a six hour crossing.

I had checked the train times on the internet before leaving the ferry and the next one was at 14:30, I had an hour to get to the train station, buy a ticket and get on the train. There was no absolute pressure, as the next was at 16:30, but I’d rather avoid the wait, so I made haste on the 10 ride to Rostock HBF (train station). 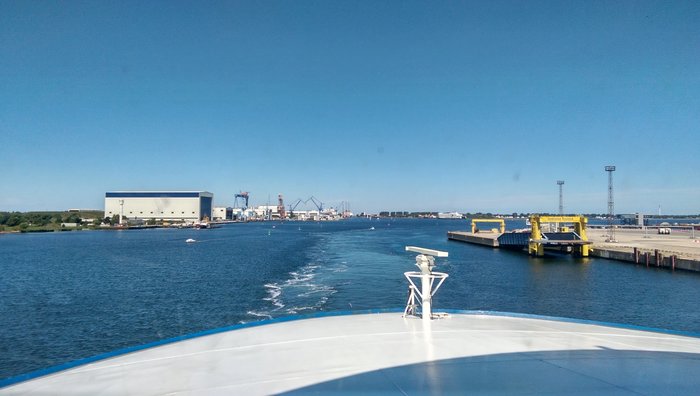 By the time I had found the ticket office and purchased my tickets (~€35 for me, ~€5 for the bike) I still had 10 minutes to spare. To access the tracks there were stairs, or a lift. There was a queue for the lift, a queue of four bicycles, and it seemed to be one biycle at a time. I queued for a few minutes, and then lost patience and decided to carry my bike down the stairs.

When I lifted the bike it seemed much lighter then I remember. This may have been because the water bottles were almost empty, or perhaps somehow I have become stronger in my arms despite doing all my exercise with my legs, or perhaps I have left something important and heavy behind - but it was easy work taking it down and then up the stairs to platform eight where I immediately saw the bicycle carriage.

There were already several bicycles in the carriage, and I added mine to the mess. The train was very busy. I took my baggage off and found the next available seat in the adjacent carriage, where I could just about see my bike.

I didn’t really secure it, as doing so would have made the bikes under mine somewhat inaccessible and was made nervous when I saw a toddler walking up and down between the bicycles, and playing with my pedals - the little shit derailed my chain - but I was more worried about the train going around a corner and the bicycle falling on him. So I went up to check it was stable, and it was - and the father of the child said “It doesn’t move, it’s perfect”.

I didn’t do much at all in the 3 hour journey in the packed train, more and more passengers and bicycles kept piling in as we went. As we approached Berlin there were four different stations, the second was the HBF (central train station), but the first I didn’t recognize. Five minutes before we arrived I searched on my phone I realised the first would be closer to my flat, so I hastily collected my four panniers (hanging them around my neck and arms) and shuffled my way towards the bicycle carriage, displacing people along the way. There were four bikes piled on top of mine now (which had made it’s way to the back). Fortunately there were people on hand to help me out and as I wheeled my bike onto the platform the toddler-father handed me the last of my panniers and smiled “good luck” and I smiled back “Danke”. 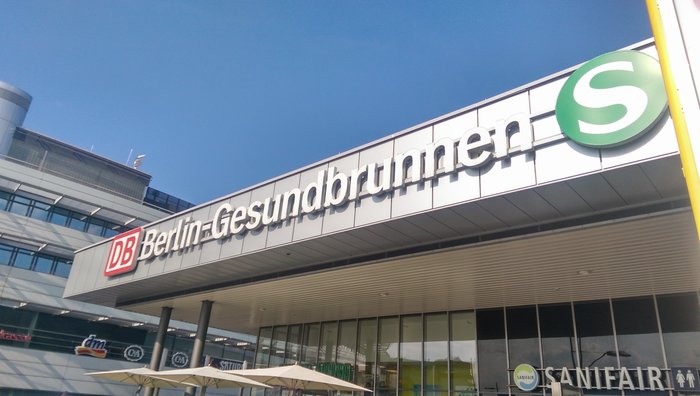 As I exited the station I recognized the place, although I had only been there once and that was on a run. In short time I was at my building. I almost forgot about my keys, I had removed them from my key fob and put them in my handle-bar basket, they were fortunately still there, although they had rusted somewhat.

I wheeled the bicycle into the corridor and hauled the bags off and heaved them up the 4 flights of stairs, then went back down for the bike, which was just in front of the mail boxes. I looked at my mail box and it was packed absolutely full of junk mail. 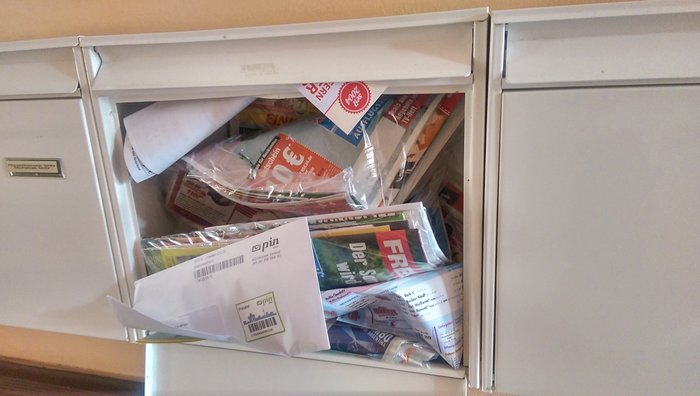 It’s probably like this in every city, but the local Netto supermarket sends a full fucking catalog to every single mailbox every single week, and then there are miscellaneous other tree crimes, but the catalog is the worst. I had been meaning to put a “No Junk Mail Please” sign on the box, and decided to do it now while I had a pen and paper.

After bringing the bike up the stairs I opened the door. I was half expecting an infestation of fruit-flies. I had mismanaged my garbage and the little shits had started hatching and I was trying to get rid of them when I left. My last tactic was to leave several bowls of red-wine around the flat. I’m not sure if that worked (the red wine had dried out and there were numerous dark spots, which may have been the flies) but in any case they were all gone (save one which I found in my shower). 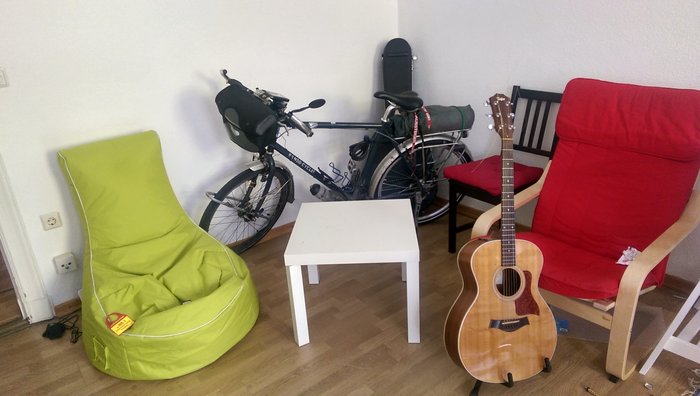 After depositing my bike, I went to the supermarket and got supplies - bread, shower gel (I used my last drops the night before), honey, soya-milk, nuts, other stuff, and a 6-pack of Störtebecker beer (with multiple varieties). I already had a four-cheese pizza in my freezer.

Being back in the flat is an anti-climax. I was looking forward to being home, but at the same time I wasn’t. Being on the road there is always an aim to each day - and a larger aim (e.g. get to Trondheim, return to Berlin) and everything between the start of the day and the end of the day is an adventure towards that aim.

Being on the road, you kind of forecast your future each day. You decide that in 2 weeks you will be in this geographic location, and today you might be somewhere in this area, and you might possibly stay at this place. In between A and B anything can happen. The only thing that is almost guaranteed is that you will have exhausted yourself by the days end and feel good about it, even if, after the seventh hour you felt dreadful and every kilometer seems like the previous ten. After an arduous day nothing is more satisfying than well-deserved sleep.