It’s been two months since the last Phpactor release.

Release 15 (0.15.0) was intended to be the release that integrated the Language Server. It has been a huge amount of work, and at least 63 tickets have been worked on. But there have also been numerous other improvements.

Phpactor now has new documentation hosted on readthedocs. The new docs can make use of the power of RST and should provide a better foundation for continuing documentation development.

Tabs and Search in the new documentation

We also generate a VIM manual for the VIM plugin.

The Language Server Protocol is now officially supported. This means that starting from today many other editors can start using Phpactor. 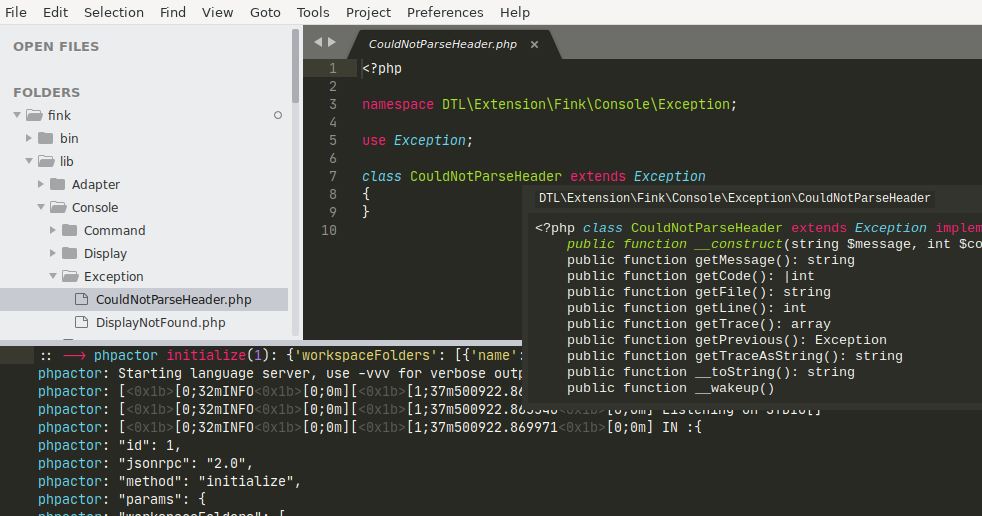 Initial work on the Language Server started about 2 years ago, but I, err, lost interest, until 2 months ago when I decided to take it on again and planned it to be released at the end of April (we’re 3 days late!). Thanks, perhaps, to Corona I have been spending more time on the project.

One of Phpactor’s “selling points” has been the fact that it worked without an indexer, unfortunately this meant that some operations would be hugely time consuming.

The indexer steps in to help with these heavier operations, but Phpactor will still work without it for most things.

The indexer means that you can now use Phpactor without composer for jump to definition and various other commands. Good news for legacy projects?

In order to keep the indexes file changes, there is a new library amp-fswatch which is an Amp Async library for monitoring file changes.

Hover was previously supported in the legacy language sever extension, but now there is a much more informative implementation:

This was facilitated by a new object rendering library.

Although this was partially implemented a few years ago, it has now been improved, and when used with CoC in VIM you get floating window support.

Goto Implementation was also implemented partially - but originally with a brute force approach, which did not work very well.

It is now facilitated with the Indexer. Due to time constraints it’s a bit limited currently:

Method support would be very useful for jumping to method implementations rather than the interface class.

Neither of these limitations would be difficult to fix.

WorseReflection was designed for short-lived processes. As a result when used in a server context it had various issues involving cached entries.

It now supports a TTL cache, so that the cache is automatically expelled after a configurable amount of time.

In the first iteration of the Phpactor LanguageSever the handlers were implemented as generators, this turned out to be problematic because the handlers were unable to pass control back to the event loop meaning that they were effectively blocking processes.

This has bow been fixed and all handlers must return a Promise.

When debugging I noticed lots of calls from clients to cancel requests. This is important when an operation (e.g. class completion) takes a long time, and the clients decides that it didn’t care about it anyway.

The LS now supports this operation and requests(co-routines) can be cancelled.

When starting the language server, we also want to start the indexer. This also showed a missing feature in the LanguageServer package.

The Service Manager allows control of long-running background processes in the langauge server (such as the indexer).

It was very difficult to read the output language server (and the logs of Phpactor in general), the log output has now been improved: 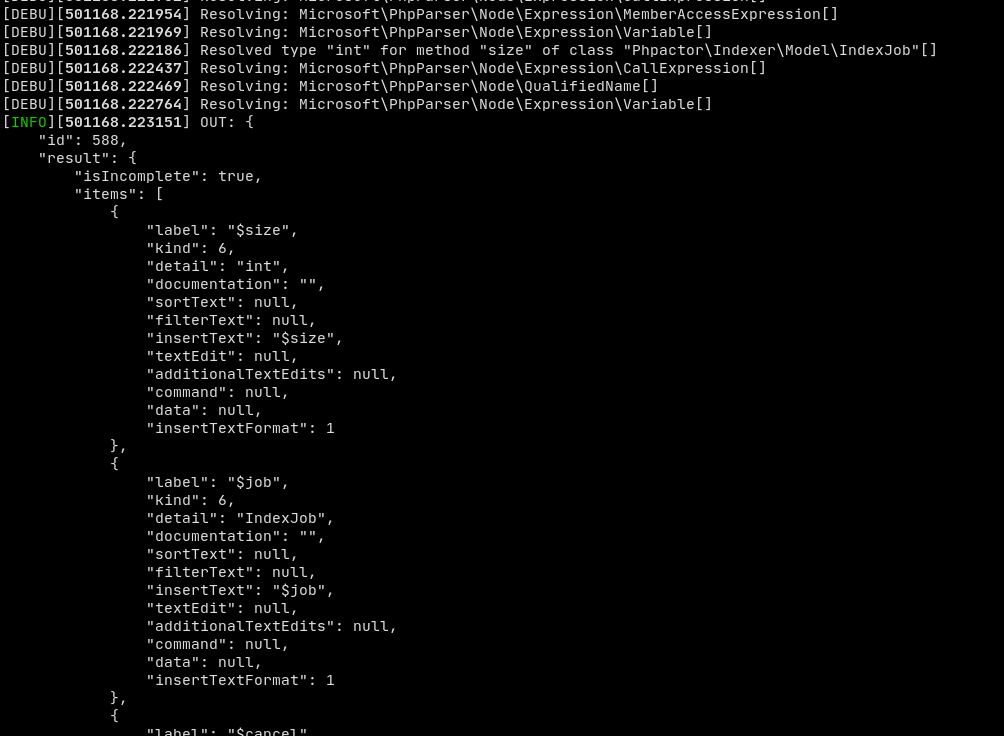 This release focused on bringing a stable language server platform. The next release should hopefully be more exciting, hopefully:

In addition it should be relatively easy to create a PHPStan and/or Psalm extension to facilitate language server diagnostics.

Although not related to the release there is now also a Sublime Text RPC client in development thanks to @tkotosz. This can be used to take advantage of Phpactor’s refactoring capabilities.

This blog post mainly details the language server which is only briefly included in the CHANGELOG. For the rest of the changelog, see the CHANGELOG.