It’s been over 6 months since the release of Phpactor 16. Time really files! I planned to release Phpactor 17 last August - but, well. It didn’t happen and in the meantime there has been a huge amount of activity in develop.

Phpactor can now be installed with the PHP 8 runtime, some necessary fixes were made to support new PHP 8 syntax and some new features:

I’m retiring the develop branch and from now on everything will be developed in master. The documentation has been updated to suggest using tagged versions and there will be a warning displayed for users still using develop.

It can often be the case that develop is more stable than master and I want to release more often and with less overhead.

If you install Phpactor in VIM with Plug then update to: 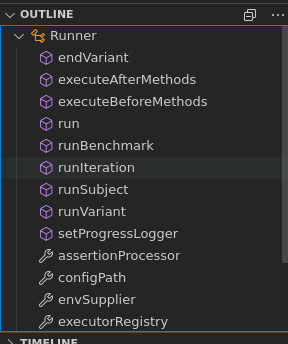 Outline view in VS Code

Phpactor’s development has been primarily focussed on VIM, but there has been more feedback for when it’s used with VS code (thanks @BladeMF) and various fixes have been made to make this a better experience.

Symbol Highlighting in VS Code

The VS code extension is here it’s not currently on the marketplace and needs to be installed manually.

The current Phpactor docblock parser is very primitive - and wouldn’t scale to generic support. A few years back I tried to implement the PHPStan PHPDoc parser, but it was much slower and it did not capture offsets (useful for editing docblocks).

The new library is marginally faster than the PHPStan parser, but still 4x slower than the original library. This is compensated however by an unrelated performance fix which makes parsing faster in heavy cases, so we make docblock parsing slower but overall I’m hoping things will be faster!

Finally it should be fairly trivial to add support for indexing docblock symbols and including them in searches.

Generic support will require some medium-to-large refactoring in worse-reflection - but will really push Phpactor’s completion abilities to the next level (it’s possible we even get there before PHPStorm 😁).

Renaming is currently only supported via. the VIM plugin and the CLI but @BladeMF has already done some great work implementing rename support in the language server - so fingers crossed that we can get this in soon.

That’s it. You’re probably using develop already, so it’s time to switch to master as that’s where everything will happen now.

Thankyou to everybody that contributed to this release.