I just installed Lineage OS on a new phone

Breaking the Pixel 4a ¶

I was out running a few weeks back, with my phone in my hand, listening to music, when I tripped over a paving stone and fell flat on my face. The phone landed squarely on it’s front and with the amount of force that I knew instantly that it was done for. Lying on my back I turned upwards and shouted theatrically in pain, then just to be sure, I picked up my phone to check, and of course it was done for: 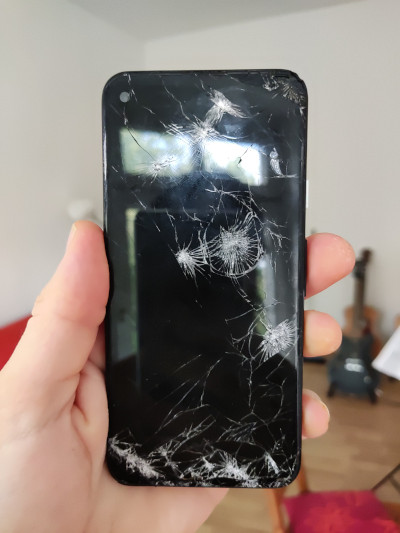 I got up, and realising that I only had a few bruises and scratches, I finished my run, the music on the phone still playing although the screen was totally destroyed.

When I got home I attempted to connect to it over USB adb but I didn’t have USB debugging enabled, I wanted to retrieve some of the data and wipe it. After reading some questionable articles I thought if I rebooted the phone and got it on the bootloader I’d be able to connect via. USB. I think I managed to turn it off, but was unable to determine if I was on the bootloader screen. It was only after doing this I realised I could use the Google find my device service to remotely reset it, and I was now not able to do this as I could no longer even boot the phone. (I just plugged it in after a week, and it doesn’t seem to start at all now).

Getting it still fixed I guess is an option, I was reluctant due to security concerns, but apparently it is fully encrypted by default (although I’m unable to confirm that).

So, long story short, I decided to get a new phone ASAP.

The bricked phone was a Pixel 4a, and it was actually a very good phone, it was the perfect size and light as a feather. The only problem I had with it was that it kept turning on in my pocket (either due to the power button being in the wrong place or some unknown cryptic touch screen gesture that I was never able to figure out, despite having disabled all the likely candidates).

I used the stock Google Android on this phone, I had intended to install LineageOs on it originally, but the stock distribution wasn’t too offensive (with the mandatory Google Pay integration being one exception) so I kept it.

This time I decided to install LineageOs

I visited the Lineage OS website found the Best LineageOS Phones of 2022. I didn’t want to spend a huge amount of money, and seing the Xiaomi POCO F3 was in my price range and had very positive reviews I decided to order it from Amazon.

It arrived the next day and I got to work installing it according to the instructions.

Xiaomi provide a tool to unlock the bootloader, I had to create an account on the website and download the app. Unfortunately the app only runs on Windows, so I downloaded the Windows Dev VM. The VM weighs in at 20GB (wonders what happened to TinyXP).

When I did manage to run the app in the VM (after having enabled virtualization in my BIOS and installed the virtualbox-ext-pack package to enable the USB connectivity I was surprised but not surprised when it told me I had to wait 168 hours.

The installation guide said as much, but somehow I really didn’t expect it. To wait one entire week?

So I waited, and installed the bare minimum necessary for work, and today, after waiting 8 days, I was able to unlock my phone.

The software bundled with the Mi phone was horrendous. All the social media apps you could imagine were pre-installed, it seemed to have some kindof fixation with reminding me about my wallpaper. Lots of Xianomi apps were forced upon you with no option to uninstall or disable them.

I think this is “normal” in the phone world, but always shocking to me. The Google Pixel 4a didn’t have half as much bloatware, but still had it’s share of forced apps.

When I purchased the phone I didn’t realise that it was so big. I usually get smaller phones, not least of all because they fit inside my bicycle’s phone case. This is a larger phone, which feels a little uncomfortable when I’m holding it to my ear.

The battery life seems fair and would probably last a couple of days with minimal use.

The screen is extremely bright and colourful.

The installation procedure went exactly as expected. By default Google apps are not enabled but as-per the instructions you can sideload them before the first boot. Unfortunately I absolutely need the Google Play Store for work, and a few other handy apps which I reluctantly depend on:

This is the software I installed so far:

I still need to install an email client, and have decided to NOT install a Twitter client to avoid doom scrolling too much, for the same reason I may not install the newspaper app (i.e. for the Guardian). I will leave these temptations to other devices (namely my tablet for the news and my laptop for Twitter).

Why Was I Running with my Phone Anyway? ¶

Only a few years ago I would run happily with my MP3 player (the Sans Disk Clip with Rockbox. It was light, and had the advantage of being dedicated to playing music because there are definite advantages in not using your phone for everything.

Unfortunately the only convenient way to get music for MP3 players seems to be to download it illegally. I could buy CDs, but that’s a terrible waste of resources if all I’m going to do is rip them and put them on a shelf to gather dust. I could also use Bandcamp, but most of the artists I’m familiar with are not on that platform (note it’s also possible to download some DRM-free music from Amazon but it’s not always an option).

So I was running with my expensive phone so that I could listen to music with Spotify, which is currently the only real way I have to listen music these days, which makes me a bit sad.